Throwing a six-pack of beer into the freezer for half an hour to quickly chill drinks might be a great party tip. But beware of carelessly leaving those beers in the freezer overnight as you will have a recipe for disaster in the morning! Besides the aspect of cleaning up the mess, freezing and thawing beer can degrade the quality of the brew (the only caveat being if low temperatures are being used as a brewing technique to produce a specific type of beer), but why is that?

Beers left in the freezer for a while can experience burst bottles and ruptured cans due to a build-up of pressure as the water in the beer turns to ice. However, beers left in a typical household freezer for a couple of minutes should be fine.

If you find yourself constantly throwing warm beer into the freezer, it would be wise to invest in the purchase of a special fridge for proper temperature storage instead of wasting time cleaning up broken booze bottles. The rest of this article will explain why beer freezes, the factors causing beer to explode in the freezer, and how to avoid this dangerously sharp mess. Read on. 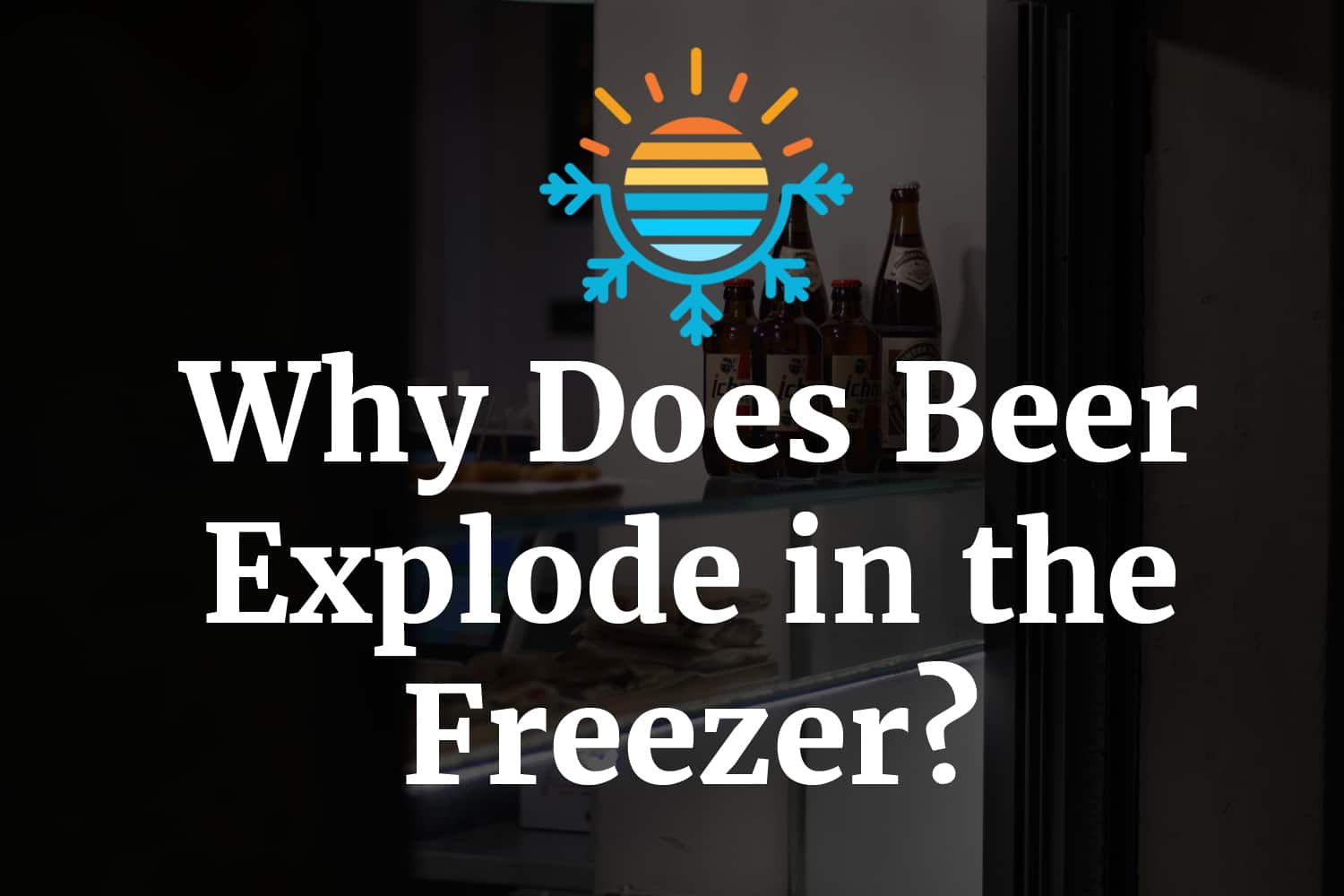 Can You Freeze Beer?

The higher the content of alcohol, the lower the temperature must be to freeze the liquid. There is a common misconception that alcohol cannot freeze, which is why many people assume that beer will not freeze as it contains some alcohol.

However, alcohol like vodka does freeze at -16.51°F (-26.95°C). The freezing point is simply lower than most home freezers’ temperature. Vodka is also made of approximately 60% of water and has a higher alcohol content than beer, which is why it takes a lower colder temperature for the drink to freeze. Generally, the “stronger” or higher the level of alcohol of the booze, the lower the freezing point.

In comparison to the amount of alcohol in vodka, most beers range from 4 to 6 percent of alcohol by volume (ABV). Beer consists of about 90 to 95% water depending on the brew and will freeze at around 28°F (-2.2°C). Beer also has sugar as an essential ingredient, which in some cases can create a slush rather than a frozen block of beer. Due to the low alcohol levels and high water content, beer will freeze faster than other higher proof liquors.

Understanding the freezing point of beer can help you keep it from occurring.

What Makes Beer Explode in the Freezer?

When the water in the brew freezes, the volume of the beer expands by approximately 9%. This occurs because, as a liquid, water molecules are constantly forming and breaking hydrogen bonds. When the water slowly freezes into ice, these water molecules arrange themselves into crystalline structures, taking on a more definite shape.

Since water expands as it freezes, this means that the beer can, or bottle can burst. While the beer does not actually explode (in the sense of a firecracker explosion/detonation), the cans or bottles may experience fractures causing the contents to ooze out.

You definitely do not want to risk drinking the remainder in the broken drink container due to potential glass shards. The clean-up can be very tedious as the frozen beer will overflow and possibly coat all the contents in the freezer with a frozen booze layer.

How Long Does It Take to Freeze Beer?

Most household freezers are set to 0°F (-18°C); a bottle of beer will take about 90 minutes to freeze completely, so as a general rule of thumb, do not leave your beer in the freezer for longer than 30 minutes. A larger bottle of beer will take longer to freeze due to the amount of liquid in the bottle. If the beer is warmer than room temperature on a hot summer day, you could put it in the freezer for up to one hour without freezing the beer or damaging the bottle.

A frozen beer explosion doesn’t only happen in your freezer. During the winter, you should consider the temperature before keeping a case of beer inside your car. While the vehicle’s interior provides some protection from the cold, eventually, the beer can freeze and rupture, ruining the interior of your car! 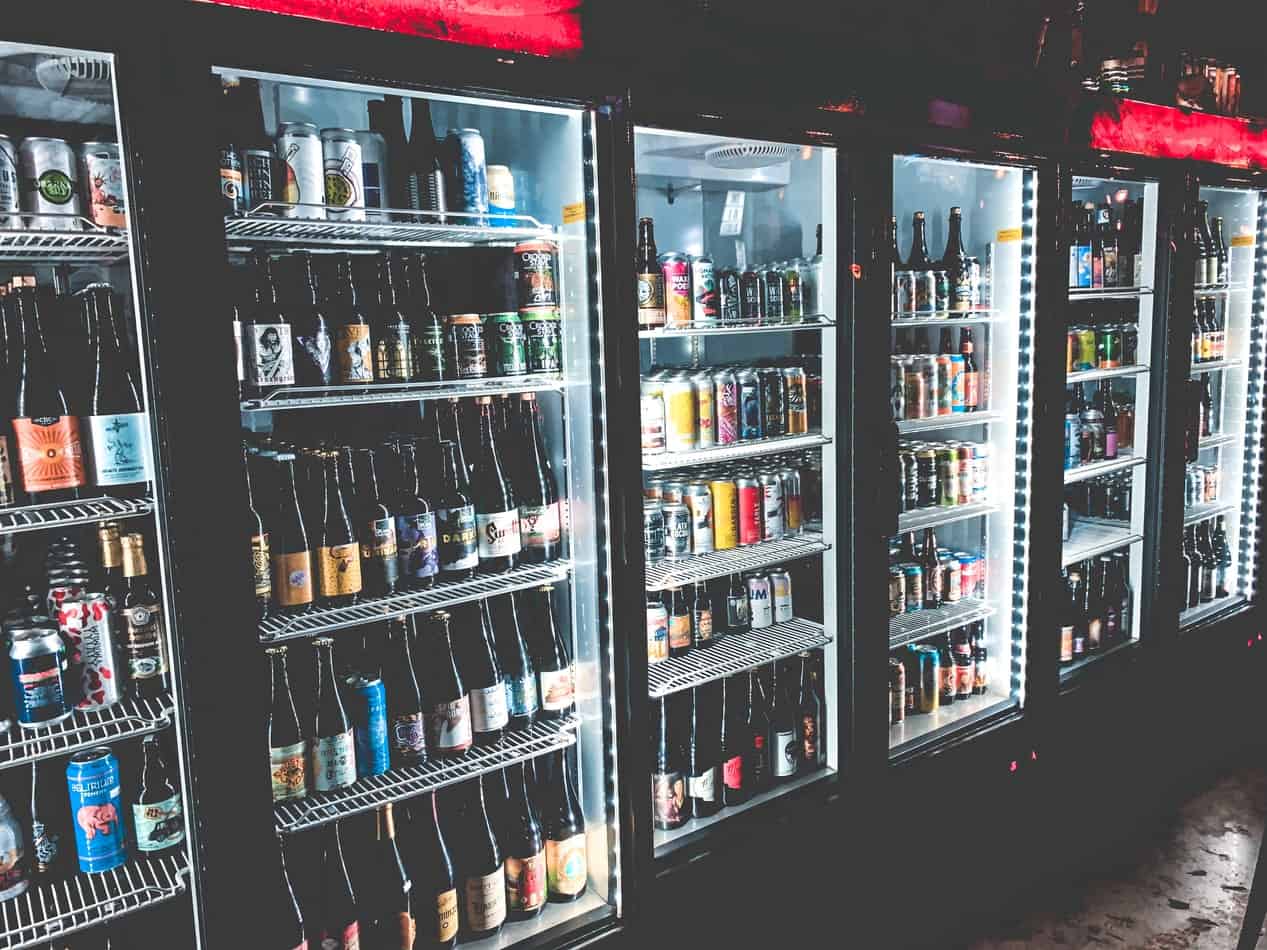 What Happens to Beer After It Is Frozen?

If the drink is broken or the bottle’s cap has popped off, it can taste flat due to the lack of carbonation as the carbon dioxide is the “first thing to gas off.” If the beer’s seal is intact, you can simply put it back in your fridge and thaw it for later. It’s still drinkable, but perhaps not as enjoyable. Freezing and thawing beer can affect the brew’s quality, flavor, and aroma, as it may not be the optimal flavor profile intended by the beer brewery.

This beer brewery in Calgary, Canada, found multiple kegs of their best beer completely frozen one winter morning in January and threw away the frozen booze stating, “Once it gets too cold, even if it’s frozen and thawed it’s not going to taste the same. Our brewers take a lot of pride in what they make, so we thought ‘Dump it all, start over.”

On the other hand, the Eisbock style of beer uses freezing intentionally during booze production. By partially freezing the beer and removing the ice that forms on top, the flavor and alcohol content becomes more concentrated in the brew. The alcohol content increases because the frozen pieces are mostly water, leaving behind more alcohol.

Chilling Beer Without a Freezer

Place your beer (or any drink you want to chill quickly) in a bucket of ice water with a hefty sprinkle of salt. Since salt lowers the freezing point of water, the icy water surrounding your beer is colder, and your beer chills faster without the risk of freezing it.

Also, instead of chilling your beer in a freezer, consider a dedicated beer fridge with customized temperature control like this NewAir Freestanding Beverage Fridge to hold your booze. Premium high-quality beer fridges like this Antarctic Star Beverage Refrigerator also have a double-paned tempered glass window that offers protection from harmful ultraviolet rays that can cause the beer to “skunk” or degrade over time.

Why Did My Beer Not Explode?

So we’ve come this far, but you have decided to experiment by leaving beer in your freezer overnight to see if your beer will explode in the freezer despite all warnings. But if it did not explode, the following lists a couple of variables that may have stopped the fun:

It might be tempting to pop your beer into the freezer, but remember to exercise caution, and don’t forget to remove your drinks after thirty minutes to an hour. As the beer chills in the freezer, pressure builds up in the bottle as the water in the brew turns into ice, causing an explosion – or at minimum, a little leak of booze from the uncontainable expansion.

But besides the potential mess, the freezing beer can degrade its quality due to the lack of carbonation to the taste of the drink. For a serious beer connoisseur, a beer fridge is essential when storing all your favorite craft brews.