Dyson fans are undoubtedly the coolest looking fans in the market. But they’re not necessarily the cheapest, costing many times more than a regular fan that does the job just as well. But potential owners might be wondering if there any long-term benefits to investing in a Dyson fan over a regular fan, especially when it comes to energy efficiency.

In this article, we will explore the power economy of a Dyson fan in detail. We will also discuss exactly how much electricity one of these luxury fans consumes, and compare it to the electricity consumed by a regular fan.

Pro-tip: If you’re looking for a Dyson fan that saves money on electricity usage, check out the top energy-efficient Dyson fans on Amazon.com now. 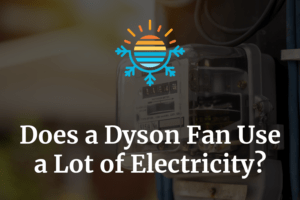 How Much Electricity Does a Dyson Fan Use?

It may seem counter-intuitive, but the futuristic and hi-fi-looking Dyson fans actually consume less electricity than a regular fan.

Let’s consider one of the less expensive models, the Dyson AM06 desk fan. It has a power rating of up to 26 watts. So, if you were to run this fan non-stop for a year, with the settings turned up all the way, it would cost you just 228 Units (kWh) of electricity. Your typical fans are usually rated at around 50 Watts and would cost you twice as much to run.

Another Dyson fan, the TP01 Pure Cool tower fan, is one of the more expensive models and has a power rating of between 6 to 56 watts.

As you can see, at the lower settings, Dyson fans are rated much lower than your typical fan. If you were to run the TP01 non-stop at the highest settings for a year, it would consume around 490 units (kWh) of electricity. While that is still a lot of electricity, it isn’t nearly the same as the power consumption of something like an air conditioner.

While the difference may not seem much, it is worth considering that a Dyson fan serves as a long term investment, given its sturdier build quality. Also, considering that these fans are in general quieter and safer compared to your average pedestal fan, a Dyson fan will start to appeal to you.

So the answer to the question whether or not a Dyson fan consumes a lot of electricity would have to be no. It is worth noting, however, that some Dyson fans can also double as a heater. And when used as heaters, they will consume up to 1500 watts per hour. But this increased power consumption is typical of any heater.

How does this compare to regular fans and air conditioners?

Air conditioners are notorious for their high electricity consumption. Your average 24000 BTU AC (suitable for household use) will consume around 300 watts of electricity per hour on average. Of course, air conditioners have a completely different working mechanism compared to fans, and as such, do a much better job at cooling a room. Also, they cost just as much as a Dyson fan.

But of course, unlike air conditioners, Dyson fans are portable, and they consume much less electricity. So compared to air conditioners, they could make a better investment. Compared to fans, it really depends on your budget. A $20 fan can keep you just as cool as a $500 Dyson fan, but the latter comes with other benefits.

Is a Dyson fan worth its huge price tag?

One question you might have as a potential buyer is whether or not the Dyson fan is worth its huge price tag. After all, these devices will cost you many times more than regular fans, most of which get the cooling done just as well.

First of all, most Dyson fans come with multiple functions. The more expensive ones have a heating mode, an air purifier, Wi-Fi connectivity, etc. Besides these cool features, these fans are also incredibly well-built, meaning they will last you a long time. So if you don’t want to be buying a new cheap fan every couple of years or so, consider getting a Dyson fan. They will last you much longer.

Design-wise, Dyson fans are undeniably awesome. If that’s something very important to you, then there is no better alternative in the market. But, the cool bladeless design also has another advantage.

Although most fans do come with an external cage, things still do occasionally slip into the frame and get caught in the blades. That makes these fans a hazard, especially when you have kids around. Fans with no blades are the safest.

How does a Dyson fan work?

It probably wouldn’t be fair to the reader if we didn’t include a short section about how a Dyson fan actually works. One can be sure that anyone who has ever seen one of these devices has wondered how a fan with no blades functions.

First of all, you should know that a Dyson fan actually does have blades. They’re just hidden on the inside of its round tube. The movement of these asymmetrically arranged blades, facilitated by a motor, pulls air in (as much as 5 gallons or 20 liters per second) from the back of the device. This air then flows through and around the hollow tube before being released from the front of the fan at a much higher speed. This is where two different laws of physics kick in.

Inducement and Entrainment result in a lot of the surrounding air being pulled in as well, along with the stream of air being directed from the front of the Dyson fan. This means that as much as 15 times more air is directed towards the person sitting in front of the fan than the air that was initially sucked in at the back. Hence the term “air multipliers.”

Now, as far as the cooling effect is concerned, a Dyson fan performs exactly like a regular fan does. A fan doesn’t actually cool the air in the room like an air conditioner does. What it does is it collects air and directs it forward at a higher speed, producing a breeze of air. This breeze interacts with the sweat produced by your body, evaporating it and giving you a cooling effect in the process.

Dyson fans have a frighteningly large price tag compared to traditional fans, and buying one seems even less of a good idea when you consider that their performance, cooling wise, is comparable to that of traditional fans. But there are plenty of reasons for you to still consider getting a Dyson fan, other than the undeniably cool design. One of those is lesser energy consumption.

While the look and the design of a Dyson fan suggest that it might consume a lot of electricity, in its cooling mode, it actually consumes less electricity than a traditional fan – something that’s definitely worth considering.