Down comforters can keep you cool. Because they’re highly breathable, they provide ample air circulation, which accelerates the rate at which sweat dries off your skin. When sweat dries off, it provides a cooling effect, thus helping prevent your body from overheating.

The rest of this article will explain in great detail the mechanisms behind this process, the factors affecting it, and what to consider when choosing a down comforter to keep you cool. 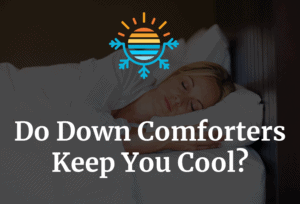 What’s inside a down comforter?

To help you understand how it keeps you cool, let’s take a look at the components of a down comforter.

Inside, you’ll find light, fine feathers extracted from beneath the tougher superficial feathers of geese and ducks. Often, these are referred to as the “down” of a comforter.

The outer layer is made of fabric and is often stitched to secure them down in place and keep them evenly distributed.

How does a down comforter keep you cool?

To keep you cool when it’s hot, a down comforter relies on two important characteristics of the down filling, namely:

Let’s see the role each factor plays in keeping you cool under the sheets.

As mentioned earlier, down comforters are highly breathable and facilitate air circulation even when you’re covered up. Improving air circulation allows moisture from your sweat to evaporate, which prevents the build-up of humid air under your beddings.

But what does humidity have to do with keeping you cool?

To help you understand how humidity affects your body temperature, you need to know the mechanisms involved in thermoregulation.

Your body cools itself by releasing water and salts (AKA sweat) through the skin pores. As the sweat evaporates, it releases excess heat from your body into the surrounding air. Since water generally has a high latent heat, the evaporation process takes up enough heat to provide a cooling effect to your entire body.

However, the rate at which the water evaporates from your skin depends on how moist the air around you is. When you’re surrounded by dry air, sweat evaporates at a faster rate. In contrast, the evaporation process is slower in humid air.

When the humidity gets too high, your body’s natural cooling system may be compromised. That’s because sweat evaporation slows down, and the body starts heating up—which translates to you feeling hot and sticky.

So by allowing air circulation to prevent the build-up of humid air around you, a down comforter increases the rate at which sweat evaporates from your skin. This subsequently increases the effectiveness of your body’s natural cooling mechanism, which helps keep you cool even when tucked in.

The filling used in down comforters has special insulation capability. When it’s cold, the down plume traps your body heat in the loft of the filling to keep you warm.

But when it gets hot outside, the same insulation mechanism helps your down comforter keep hot air out and only retains the right amount of warmth from your body in the down plume.

This way, you don’t get too hot or too cold.

How to choose a down comforter that keeps you cool.

Sure, any old down comforter can keep you cool. But to maximize this benefit, there are several critical factors you’ll want to consider. These include:

Here’s a deeper look at how each factor affects a down comforter’s cooling capability:

Typically, down comforters come with a fill power rating. This is the industry standard measure of the down quality and indicates the ability of any given down to trap air or loft. Generally, a high fill power rating is a mark of high quality down.

Essentially, this rating denotes the number of cubic inches a single ounce of down feathers will occupy without any pressure. To obtain this rating, an ounce of the down filling is compressed and then released. It’s then allowed to expand, and the maximum amount of space it occupies is recorded in cubic inches. The result is the fill power rating of the down in question.

Since the fill power rating shows the quality of the down and its ability to expand so it can trap air, it’s an indicator of the level of insulation provided by a given down comforter.

And since we’ve established that insulation plays an important role in regulating the temperature underneath a down comforter, this is a measure you’ll want to pay attention to when choosing a comforter that keeps you cool.

For maximum insulation, choose a comforter with a fill power rating of 750 and above.

The thread count of a down comforter refers to the number of threads sewn into its surface per square inch. The higher the thread count, the smoother, quieter, and more breathable a comforter will be. On the other hand, down comforters with an extremely low thread count are downright crunchy and produce lots of rustling sound when you move around.

So when shopping for a down comforter that will provide maximum cooling and comfort, you’ll be better off keeping the thread count high.

The two most common types of construction in down comforters include:

Here’s a deeper look at each type:

This is the most common type of construction on the market today. Down comforters with a sewn-through construction are less expensive than their baffle box construction and come with sewn separations to secure the down filling in place.

Even though this kind of construction keeps the down from shifting out of position, some insulation and heat are lost between the stitching. While the individual fabric pockets do provide proper insulation, the insulation isn’t as efficient in areas where the filling is compressed by the stitching.

That’s because a down comforter’s ability to provide insulation largely depends on the air trapped between the down filling. So if you’re looking for a down comforter to keep you cool, one with a sewn-through construction may not be the best option.

A baffle box construction is much more sophisticated than a sewn-through stitching pattern. Rather than sewing the exterior layers of fabric into strips/pockets, baffle boxes are stitched into the inner layer of the down comforter.

Typically, high-end comforters have numerous layers of these boxes. This allows the comforter to keep the feathers in place while also providing equal heat distribution throughout.

And since baffle boxes allow the down filling to loft and expand, the feathers don’t end up lumping up. This means they can trap air between them more efficiently to provide better insulation.

So for someone looking for a down comforter that keeps them cool when it’s hot and warm when it’s chilly, a baffle box construction is a better option than its sewn-through counterpart.

While it’s true that a down comforter provides warmth, it can also keep you cool when it’s hot, thanks to the natural breathability and insulation of down. However, this depends on the thread count, type of construction, and the fill power.