When many people want to cool down, turning on a fan is often the first thing they do. But since fans use motors and mechanical devices are never 100% efficient, they must actually contribute to the heating of a room, right?

Technically, fans make a room hotter. The fan motor produces a small amount of heat, which is then distributed into the room. However, the practical effect of this is negligible. Unless you’re in a tiny sealed room, the heat will dissipate and make no real impact on the room’s temperature.

So if you’re worried about your fan’s motor counteracting the cooling effect that you’re looking to achieve with a fan, you can breathe easy.

The rest of this article will explain a few questions related to this question in great detail, including how fans work to generate heat, why the heat they generate won’t make a real difference in the room’s temperature, and how fans make you feel cooler if they don’t actually generate cold air. 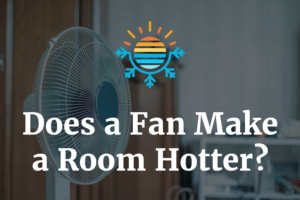 Contents hide
How does a fan affect air temperature?
Factor #1: The Motor Makes the Surrounding Air Hotter
Factor #2: The Air Movement from the Fan Blades Causes a Slight Temperature Increase
The Verdict: Fans Essentially Make Zero Impact on a Room’s Temperature
How does a fan make you feel cooler?
How Fans Help with Cooling by Evaporation
How Fans Help with Cooling by Convection
The Caveat
Final Thoughts

How does a fan affect air temperature?

If you think about it for a few seconds, fans should make the air feel hotter.

As I mentioned, the motor produces and emits heat. And on top of the heat the motor produces, you also have to consider the fact that the fan causes the atoms and molecules of the air to move much faster than they normally would.

Let’s see how much of an impact these factors really make on the temperature of your room.

Your fan’s motor gives off heat when it produces the energy to run the fan.

Remember, fans are electrical devices, and electric currents heat things up. And when the coil of wire inside the fan that the electric current runs through heats up, some of that heat is transferred to the surrounding air.

However, the heating up of the air surrounding the coil is incredibly minimal. In fact, in a quick experiment performed by Rhett Allain for Wired magazine, the temperature of the air around the fan only increased by 0.011°C per second.

To add to this, the only air to heat up was right next to the fan’s motor. Because the heat given off by the coil was so minimal, the temperature of the air a few feet away from the fan was basically unchanged.

Factor #2: The Air Movement from the Fan Blades Causes a Slight Temperature Increase

Given that one of the basic tenets of physics is that things get hotter when the atoms and molecules that compose them move around faster, you would think that the motion of the fan’s blades forcing the air to move faster would generate heat.

Well, a physics professor by the name of Chad Orzel wrote about this very concept in an insightful Forbes article. He was playing a basketball game in a gym and started wondering whether stirring the air with a fan was raising the temperature of a space that was already uncomfortably hot.

I’ll spare you from the complex math he discussed (you can check it out in the article if you like), but his conclusion was that while the fan does increase the total energy of a tiny volume of the room’s air ‒ and an energy increase does equate to an increase in heat ‒ the actual impact on the room’s temperature would be incredibly small.

From a technical standpoint, the combination of the fan’s motor and the increased speed of the atoms and molecules do raise the temperature of the room slightly.

However, from a practical standpoint, this temperature increase is so minimal that it might as well not exist. If it did have a significant impact, we probably wouldn’t use fans for the purpose of cooling us down.

Indeed, the cooling effect that a fan has on your body is much greater any residual heat created by the motor or stirring of air ‒ let’s explore that in more detail below.

How does a fan make you feel cooler?

There are two primary ways that the human body cools itself down: sweating and vasodilation.

The cooling method that fans help with is sweating. Sweat cools your body by lowering your internal temperature when it evaporates.

As the air blown by the fan passes over your skin and the sweat that your sweat glands release, it helps to cool you off by enabling two processes: evaporation and convection.

How Fans Help with Cooling by Evaporation

The evaporation effect is the easier of the two to understand.

As mentioned, your body cools down when sweat evaporates. This happens because sweat absorbs heat inside your body and brings it to the surface of your skin. When it evaporates, that heat is transferred to the air surrounding your body, thus cooling your body down.

Using a fan accelerates this evaporation process because the increased airflow causes the evaporation to happen faster. This is why faster fan speeds help you feel cooler than slower fan speeds: higher speeds increase the airflow, which results in a faster evaporation rate.

How Fans Help with Cooling by Convection

The evaporation effect contributes to the majority of the cooling that fans produce, but there is another way they can help to lower your body temperature: the process of convection.

There are three different modes of heat transfer: conduction, convection, and radiation.

When your sweat evaporates, the heat contained in that sweat is transferred to the air surrounding your body. This method of heat transfer is conduction.

If the air around your body is stationary (like when a fan isn’t blowing air at you), the rate of conduction slows as the temperature of the surrounding air heats up. This causes your body to cool at a slower rate over time if you aren’t moving, and the air around you isn’t circulating.

However, when a fan is blowing air at you, the heat released from your sweat is constantly being transferred to fresh cool air instead of the same stagnant air. The air that your body’s heat is transferred to is immediately blown away from your body, taking the heat along with it. This method of heat transfer is convection.

So basically, fans cool you down in two ways:

The general consensus that fans cool you down isn’t valid when the air temperature is particularly hot.

The Environmental Protection Agency (EPA) recommends that you don’t use fans when the temperature is hotter than your body’s normal internal temperature of 98.6°F. If the thermometer reads 99°F or more, using a fan to blow that hot air across your body can actually heat up your body through the convection process.

If you still want to use a fan to cool down when the temperature is 99 or higher, I recommend cooling down the air the fan blows at you by placing a bowl of ice in front of the fan. For more information on this, read my step-by-step guide on How to Cool Down a Room With Ice.

From a technical standpoint, fans do make a room hotter in two ways:

However, from a practical standpoint, the heat produced by the motor and the movement of air is so little that it may as well not exist at all.