When it comes to ceiling fans, the number and variety of options might surprise you. If you are looking to buy one, should you buy a fan with 3 blades or 5? Won’t the fan with more blades move more air around — in other words, be better?

A fan with more blades will not necessarily move more air and perform better. How much air a fan moves is determined by a number of factors. These include the fan’s motor and the angle (or pitch) and size of the blades, in addition to how many blades there are.

You should weigh all of these factors before you buy a ceiling fan, as they often work in tandem. Below, we will discuss how fans work as well as dive into the different elements that you need to consider. 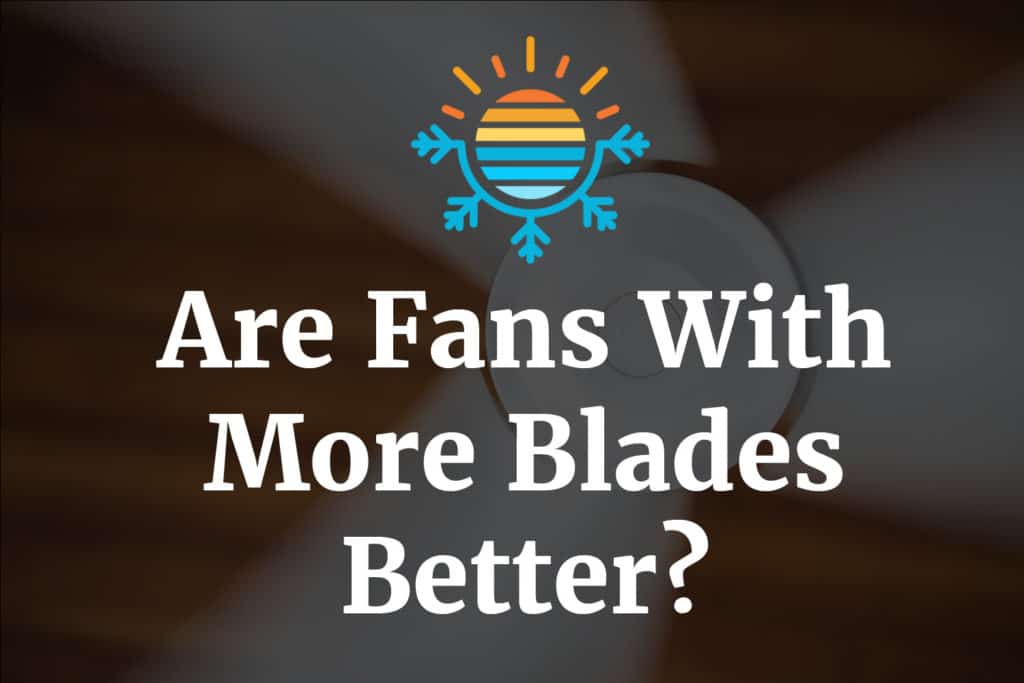 How Do Fans Work?

They Cool Our Bodies, Not Our Rooms

When we become hot, we sweat in order to release excess heat. Sweating helps our bodies maintain their normal 98.6℉ (37℃) internal temperature. As Pamela Webert, an exercise physiologist at the Henry Ford Health System, puts it: “If we didn’t sweat, our bodies would literally cook from the inside out.”

So, you can think of fans as helping from the outside-in. The air movement created by fans accelerates our natural cooling process by creating a “wind chill.” As air moves over our skin, it evaporates the sweat on our skin’s surface. According to the government program Energy Star, “the breezes stirred by a ceiling fan can make you feel as much as 8℉ [-13.3℃] cooler.”

What this means is that fans do not actually cool a room — they cool us, by creating a wind chill effect that acts in conjunction with our sweat.

Their Blades “Drive” the Air

The best fans are optimized for this effect. A typical modern ceiling fan has an electric motor, a “housing” or covering for that motor, a rod (called a downrod) that connects the motor housing to the mount in your ceiling, and, of course, blades.

A fan’s blades are oriented at such an angle, or pitch, that they “attack” the air through which they move, driving that air down toward us.

Some fans also come with a built-in reverse switch. This causes the blades to move clockwise and drive the air upwards. That’s helpful in the winter months when an upward draft mixes cooler air near the floor of your room with the warmer air near the ceiling.

Given the way fans are designed to “drive” the air in certain directions, the pitch of the blades is of optimal importance. It’s one of the first things you should look at before deciding on a model.

What Should You Look for When Buying a Fan?

According to The American Lighting Association, a fan’s “blade brackets should be positioned to hold the blade at a 12-15 degree angle for optimal circulation.”

A steeper angle or pitch drives more air as the blades whirl, creating a faster airstream that keeps you cooler.

The video below from the folks at CeilingFan.com (which also offers other helpful tips) recommends a specific pitch of 14° or above because that “requires a bigger, stronger motor to move the fan”:

However, while 14° is a good angle to aim for, you shouldn’t automatically assume that a fan with a steep pitch will be paired with a strong motor. Energy Star cautions that “some models offer a higher blade pitch to compensate for a smaller, less efficient motor.”

In the ceiling-fan industry, as elsewhere, there are scammers, so you’ll want to look into the motor after you’ve made sure your fan’s blades have a steep (at least 12-15°) pitch.

The trusty ALA recommends you look for “high-quality motors with heavy-duty windings and sealed bearings that are permanently lubricated.”

Windings are turns of wire that form a coil through which an electrical current can travel. Sealed bearings are a type of bearing (an element in a machine that restricts movement to only the desired motion and reduces friction) that’s pre-greased and has rubber seals.

If that sounds a little too technical, that’s understandable. You can always ask the sales associate or your technician if the fan you’re considering contains these two elements in its motor. Knowing which questions to ask is half the battle.

What’s plain is that the quality of a motor affects how noisy the fan is — or not. Motors with weaker windings, or with bearings that can lose their lubrication (like bearings that rotate in oil and occasionally need more oil) tend to be noisier, while high-quality motors are quieter.

As with most things in life, the better motors — those that are stronger/quieter — are usually the most expensive. They’re also the most durable. A performance-grade fan can run “continuously,” while 8 hours or fewer is best for an “economy grade” fan.

This is an important detail when it comes to both energy efficiency and general comfort.

A fan with short blades will need to spin faster than a fan with long blades in order to cool you the same amount. Energy.gov points out that “This may be important in areas where loose papers or other objects will be disturbed by a strong breeze.” A fan with longer blades that spins more slowly might be a good fit for an office or even a kitchen.

Both blade pitch and motor strength also factor in. Cheap fans often spin blades that are short with a shallow angle. Such fans whir swiftly, but they “move less air than a slower but stronger fan spinning longer and steeper (12° to 14° pitch) blades,” say the experts at Energy Star.

You can see the picture of an optimal fan slowly coming into focus: It has a strong motor and steeply pitched, often longer, blades.

(In their video below, our friends at CeilingFan.com recommend blades that are “oar-shaped” as well.)

While we have seen that more blades will not necessarily make a fan better if, say, the motor is too weak or the pitch of the blades is too shallow, the number of blades in a fan can slightly alter your experience.

The people at Martec agree that fans with more blades are often quieter, producing less ambient noise, while also tending to be better balanced.

However, if your fan has a strong motor, fewer blades will cause it to turn faster and create a greater wind chill effect.

If the other essential elements in a fan — blade pitch, blade length, and strength of motor — are lacking, a fan with more blades will not be any better than a fan with fewer blades. The number of blades is not the determining factor when it comes to fan performance.

However, everything else being equal, more blades can actually alter your experience. They can provide smoother, quieter airflow. At the same time, fewer blades can produce a more intense wind chill.

It all just depends on what “better” means to you.