Many people are deceived by the knowledge that hot air rises and cold air sinks. While this is true, it isn’t the whole story, and it doesn’t rationalize the statement that hot air moves toward cold air. There are more complexities involved in explaining airflow, particularly when you consider temperature as a factor.
Hot air does not move toward cold as. The temperature of air alone does not determine airflow characteristics. You should also consider properties such as heat, pressure, and density. For example, cold air is denser than hot air and will sink to lower levels in Earth’s atmosphere.
This article will give a brief overview of how and why air moves regarding its temperature. The definitions of some of the physical properties of air are examined, and air behavior examples, as seen via the weather, will be described. Furthermore, you will understand the need to intervene when it comes to efficiently heating or cooling your home. 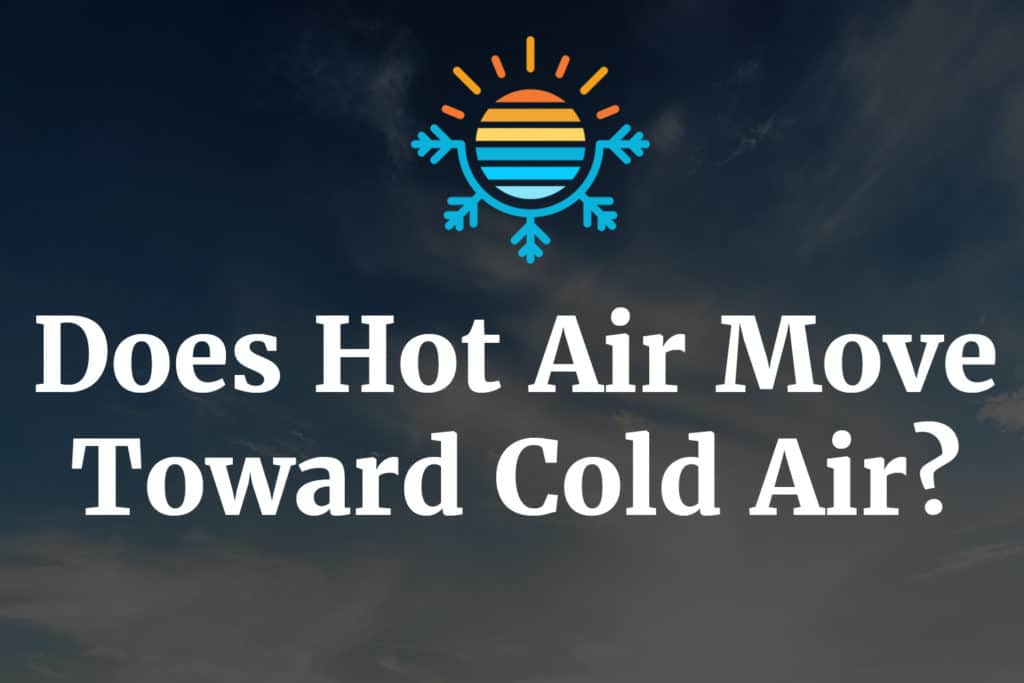 Thermodynamics at a Glance

When we talk about the properties of hot air and cold air, particularly how airflow is affected, we are talking about some specific physics known as thermodynamics, which discusses the relationships between properties within a substance like heat, pressure, density, and temperature.
Hot air is less dense and lighter than cold air, allowing it to rise above the heavier, colder air. On their own, hot or cold air won’t move toward one another. Instead, they are affected by the conditions of the environment, such as pressure. A separate force like wind can push and move air around, and it should be noted that cold air is pushed easier and moves faster than hot air at lower atmospheric levels.
Hot air and cold air may affect each other because they compete for space. For example, when the hot and cold air meets, the hot air can get pushed up by the cold air forcing its way underneath. If outside forces cause hot and cold air to mix, essentially, the cold air gets absorbed into the hot air, allowing for a heating/cooling effect that blends the air temperatures.

Mathematically, the density (d) of something can be determined by dividing its mass (M) by its volume (V), as expressed by the equation d = M / V. In other words, density is the ratio of how much stuff is packed into a specific space. However, pressure and temperature will both have an impact on density.
In cold air, the molecules that make up the air will contract and get closer together, occupying a smaller space, thus creating a higher density than warmer air. This air’s heavier weight will drop due to the force or pressure or the gravity upon it.
Hot air is less dense because its molecules are spread out, so fewer molecules will occupy the same sized space, and its lighter weight allows it to rise higher levels in the atmosphere.

The pressure is a derived unit of measurement determined by the amount of force that is applied upon something. How much surface area something has and how much force exerted will result in the pressure’s value.
It is calculated by dividing the amount of force (F) by the area (A) as represented in the equation p = F / A. Particularly when scientists use the term pressure, it is to acknowledge that force is indeed being distributed across an area’s surface.
Air moves because of the pressures applied to it, such as wind or atmospheric pressure. Furthermore, atmospheric pressure will determine how high air can travel. This characteristic is then based on the temperature of the air.

It’s easy to get confused when talking about temperature, particularly when discussing heat. This is because heat is a measurement in energy transfer by way of thermodynamics. Whereas temperature is a measurement of the internal heat energy created when atoms and molecules collide and interact. Measuring that internal heat energy will result in a number on an objective scale of temperature.
When molecules are heated they move quickly and randomly and require more space to move around. When the kinetic energy is lost, and the air cools, the molecules will contract and compress, resulting in close proximities and a heavier density.

Temperature and pressure are not the only things that affect density. The levels of water vapor in the air will also play a part. Subsequently, varying factors such as altitude, will alter density measurements as well. When we use the standard temperature and pressure values, we can conclude how these other factors play further roles in airflow and thermodynamics. This also helps us predict things like weather patterns.

There are several ways hot air and cold air will interact, and we see these effects through the various conditions we describe as the weather. A weather front is created when two different air masses confront each other, and a transition zone is defined. Each air mass has different properties like temperature and humidity levels, meaning each has different characteristics in terms of behaviors.

A warm front will form if hot air pushes into the cold air, pushing it across the Earth’s surface. The hot air is like a slow steam-roll over the cold air, eventually overtaking it. This can be difficult for the hot air as it moves slower than the cold air.
Often we see clouds created ahead of these warm fronts. As the clouds lower, and if the air is unstable, it can cause stormy weather. When this front passes, the air feels warmer and is more humid.

When cold air pushes into warm air, a cold front is created. Often this will make for some dramatic weather changes. A cold front moves twice as fast as a warm front and will push the warm air ahead of the front and create storm clouds.
There are changes in atmospheric pressure that can be measured at the front, and often a drop in temperature will come once the front passes, and air will be drier. 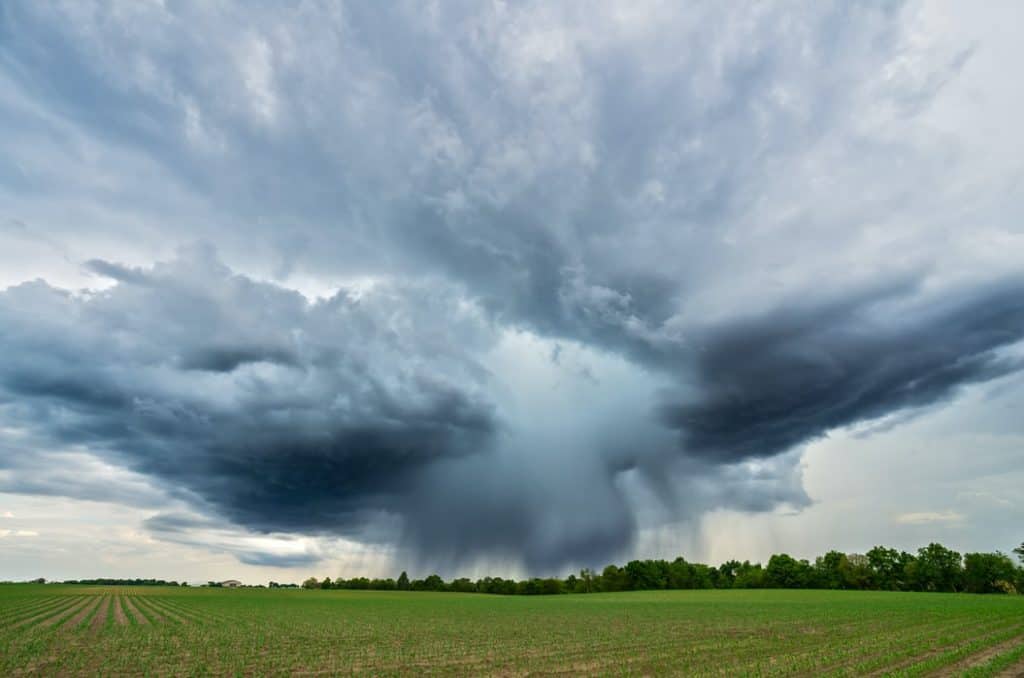 When warm and cold fronts meet, neither is strong enough to overtake the other. This is called a stationary front. It occurs with winds running parallel to each other instead of colliding from opposite directions.
Usually, the weather will be cloudy, and we often see rain or snow. Generally, a change in wind is needed to break up these fronts or force them to move in a particular direction, thus transforming it into either a cold or warm front.

A faster-moving cold front directly behind a more slowly moving warm front will eventually catch up with and overtake the warm front, creating an occluded front. It’s called such because the cold front pushes the warm front up and settles itself underneath the warm front, thus occluding itself.
Essentially these two fronts blend their abilities as they act like both warm and cold fronts do. There are often clouds and precipitation along the front, and after it passes, the air is dryer.

When it comes to heating or cooling your home, making sure the process is efficient is important. If the system or set up you have doesn’t have enough force behind the warm or cold front that it’s pushing, then you won’t feel an even change throughout the space. Instead, you will have concentrated areas of varying temperatures.
Depending on the layout of your home, certain spaces may have better airflow than others. Sometimes simply utilizing a ceiling fan or placing an oscillating fan near an air vent will assist in this process.
Ventilator fans and duct boosters can be installed to increase airflow as well. Some areas may require additional heating or air-conditioning units to be installed to ensure temperature change in steady airflow-resistant areas.

Hot air does not move toward cold air on its own. A separate force such as wind must be applied to move air, either hot or cold, toward another air mass. The variances between any two air masses will determine what kind of reaction occurs when they meet.
Examples can be seen through various weather fronts. One can mix and move air of different temperatures indoors by creating conditions that blend the air, such as by using a fan.

Alanna is an avid traveler who lives in Michigan. In addition to writing for Temperature Master, she also sells crafts on Etsy and takes long walks through the forests near her home.