Dyson fans have grown in popularity for their sleek futuristic design and engineering that allow them to cool you off without the need for conventional spinning blades. When it comes to electric-powered devices and appliances, they are separated into dual and single voltage. Where does a Dyson fan stand on this spectrum?

Dyson fans are not dual voltage. They will only work in the region they are sold in, so if you are traveling to a different country, you need to bring a voltage converter. However, the Dyson company advises against running their products on an unsupported voltage. 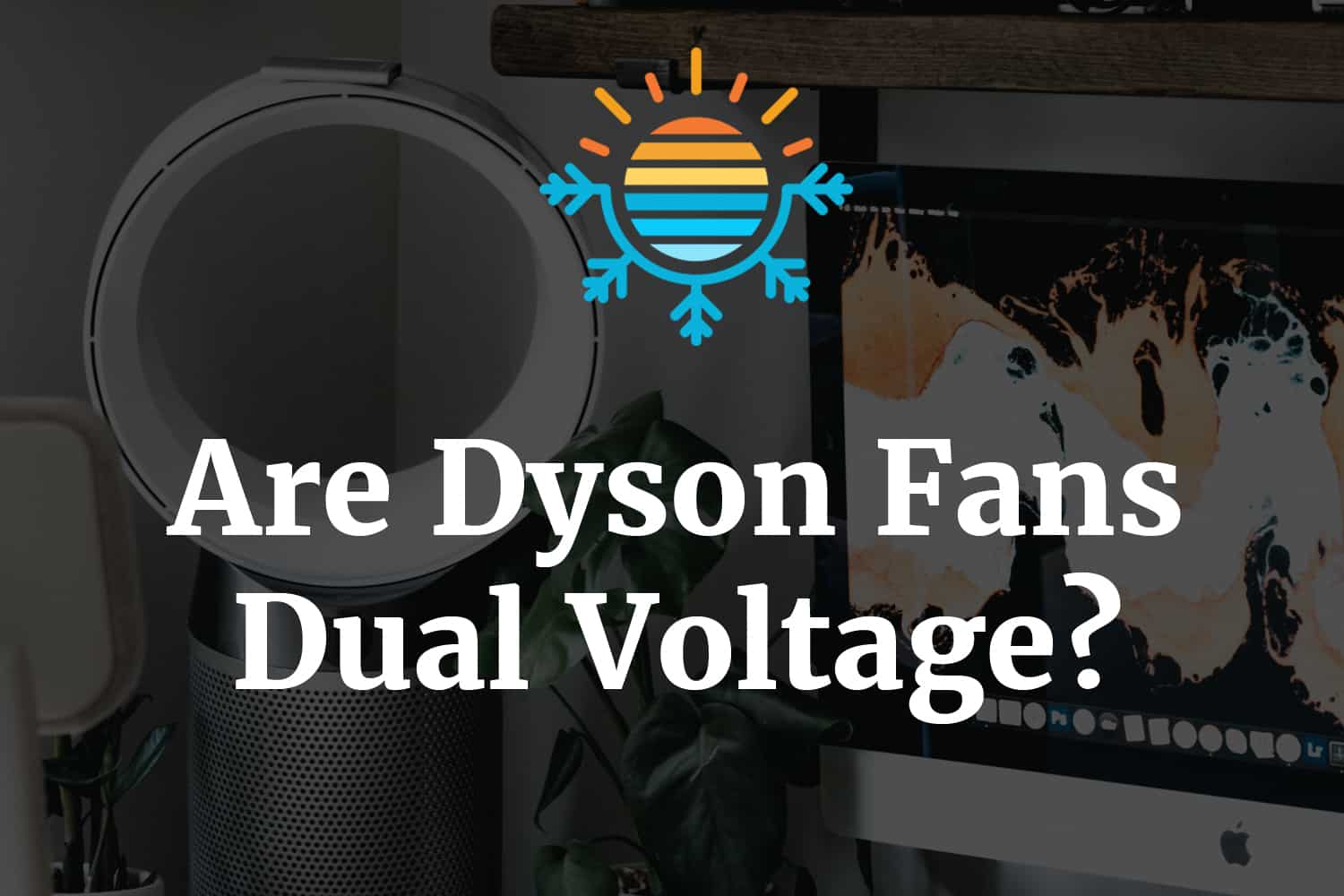 Is There a Specific Reason Dyson Fans Are Single Voltage?

We first need to understand what the difference between single and dual voltage is. To simply put it, single voltage devices accept power from power outlets that output 110V – 120V or 220V – 240V. The former is the North American range of volts outputted by power outlets while the latter is the range outputted in other regions such as Europe.

The reason why North American power outlets are different from other regions comes down to different ideologies in construction, and some companies prefer to make devices region-specific in the way they can be powered. Dyson happens to be one of those companies.

Most of your devices are probably dual voltage, such as your phone and laptop. You can check to see what voltage something supports by checking the label. This video explains how you can do this:

If you aren’t able to watch the video, you can usually see your device’s exact voltage on the appliance, following the word input.

What to Do if You Are Traveling

Suppose you are traveling from North America to a different country that uses a different voltage from your region’s outlets, and you want to bring your Dyson fan with you. In that case, a converter like the BESTEK Universal Travel Adapter will let you run it and any other device that otherwise wouldn’t be compatible.

We can’t fully advise that you do this. As previously stated, Dyson does not recommend running their fans on a converter due to concerns regarding the device’s performance and longevity.

Depending on how long you visit a different region, you can buy an inexpensive fan to use until you get back. If you are moving permanently or staying for an extended period, consider selling your Dyson for a model that works for that region.

We understand that this is a frustrating scenario. However, we want to let you know so that there are no negative surprises later on, especially if you are a traveler who is considering buying one.

Since we are discussing electricity, we want to cover how much it might cost you to run one of these fans. After all, you’ll probably want to be blowing these fans during the hot summer months all day and night. You’ll be happy to learn that Dyson fans are very energy efficient compared to most conventional fans.

The Dyson AM06, for example, only uses 26 watts of power compared to a traditional table fan, which often uses as much as 50 watts. Over time the energy usage difference becomes quite staggering. If you were to run a conventional 50-watt table fan for an entire year without stopping, it would end up using 438 kWh compared to 227.76 kWh that the Dyson fan will produce.

What does this mean for energy cost savings? To run our 50-watt conventional fan for an entire year nonstop, assuming a cost per kWh is the average of about 13 cents, it would cost you $57 a year.

In comparison, the Dyson would cost you $30 for a year of usage. These numbers may not seem like the biggest deal in the world, but incorporating a Dyson with other energy-efficient appliances can start adding up in your yearly cost savings.

Speaking of pricing, you are probably wondering how much a Dyson will cost you upfront.

Dyson fans are seen as a premium or luxury item by many. When any brand is seen as luxurious such as Mercedes, Rolex, or Apple, a higher than usual cost is brought with it. We mentioned the Dyson AM06, which is one of the lowest cost fans in their lineup, but you’ll see a number that would be considered quite large for a fan by most people.

Higher-end products in their lineup include the AM07 (tower fan), AM09 (heater + cooling fan), AM10, (humidifier), TP02 (air purifier), and the HP02 (hot and cold air purifier). They are great products indeed, but are they worth their asking price?

Are Dyson Fans Worth It?

Worth is highly subjective in this case. If you haven’t closed this article yet upon seeing Dyson fans’ prices for the first time, perhaps they can offer value to you in the form of their undeniable cool factor and features such as:

You can get yourself a conventional fan for only $50 that works well, and Dyson buyers are very much aware of this. The appeal is largely due to the aesthetics, features, and branding behind it. There is no getting around that, but for some people, that is worth the expense.

For an appliance that you’ll use practically every day, it certainly isn’t a bad purchase if you have the money for it! Dyson fans are known to last a very long time, so maybe that is something to consider if you are on the verge of trying to justify the price.

How Do Dyson Fans Work?

We’ve been calling them fans throughout the article. However, Dyson themselves might slightly disagree with that because they prefer the term air multiplier, but that is essentially just another term for a bladeless fan.

A Dyson is not a fan in the traditional sense, but they have fans powering them despite being called bladeless. When you look at a Dyson fan, your eyes are immediately drawn to the top part where the air blows out, but what is allowing this in the first place is all in the device’s base.

A fan powered by an electric motor pushes air through stationary blades where it travels to and out of the large hoop the fans are known for. It essentially sucks in air and pushes it back out hence the term air multiplier that the company likes to use. The whole process is relatively simple despite the fans appearing as though they run off black magic first.

Dyson fans are highly desirable luxury fans that not only look amazing, but they are quite functional. They can come with convenient features while sipping on electricity rather than chugging it.

While having to bring a converter or not bring the fan at all with you when traveling might be an inconvenience due to the fans being single voltage, they are still a great addition to a home for 3 reasons:

If you decide to purchase a Dyson fan, we only hope you are happy with your decision. You can also check out their other products. They are quite well-known for their vacuums.