The basic components of an ice cream vary between dairy, gelato, sherbet, or other types, but the chemistry doesn’t change from one type of ice cream to another. Whatever the ingredients used in your ice cream of choice, those ingredients are always combined into a mixture.

Ice cream is a mixture, not a solution. A mixture is a combination of ingredients that are mixed as distinct substances, not dissolved into one another. By contrast, in a solution, the ingredients are dissolved completely, so that they can no longer be separated.

This article will explore what type of mixture ice cream is and the main ingredients that go into its making. 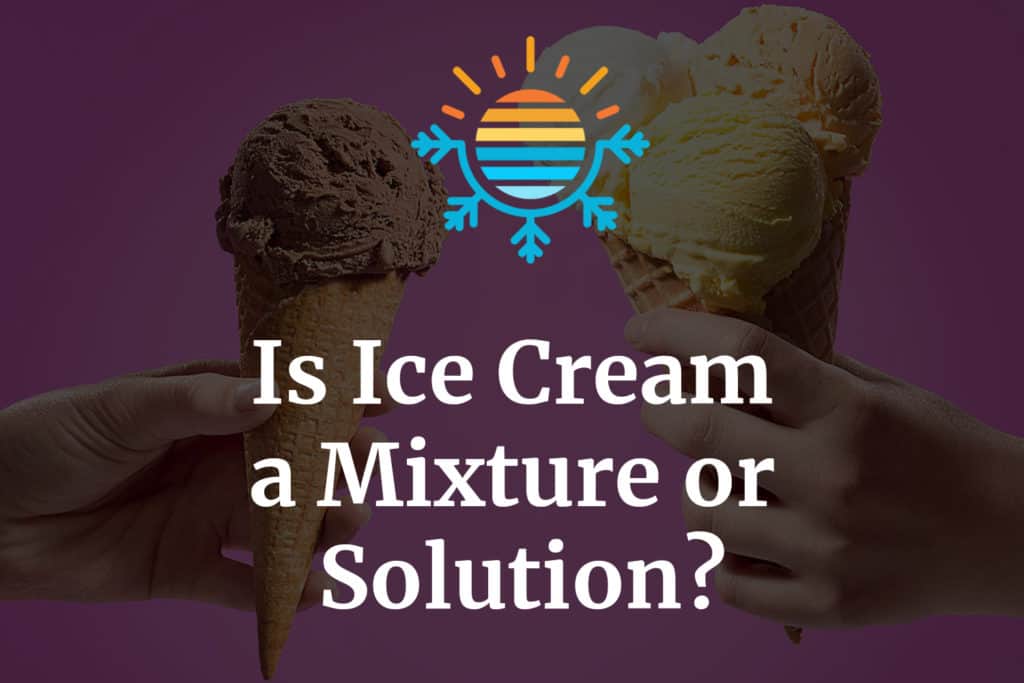 Ice Cream Is a Mixture

In The Science of Ice Cream, Chris Clarke describes ice cream as “a frozen, aerated mixture” of ingredients. The specific ingredients will vary between the different types of ice cream, with both dairy and non-dairy options, but whether it is a dairy or non-dairy ice cream, a gelato, a sorbet, or frozen yogurt, all ice creams are mixtures rather than solutions.

The Science of Ice Cream: RSC
Buy on Amazon

In chemistry, a mixture is a physical combination of two or more substances that retains the separate identities of the components in the mixture. There is no chemical bonding in a mixture. 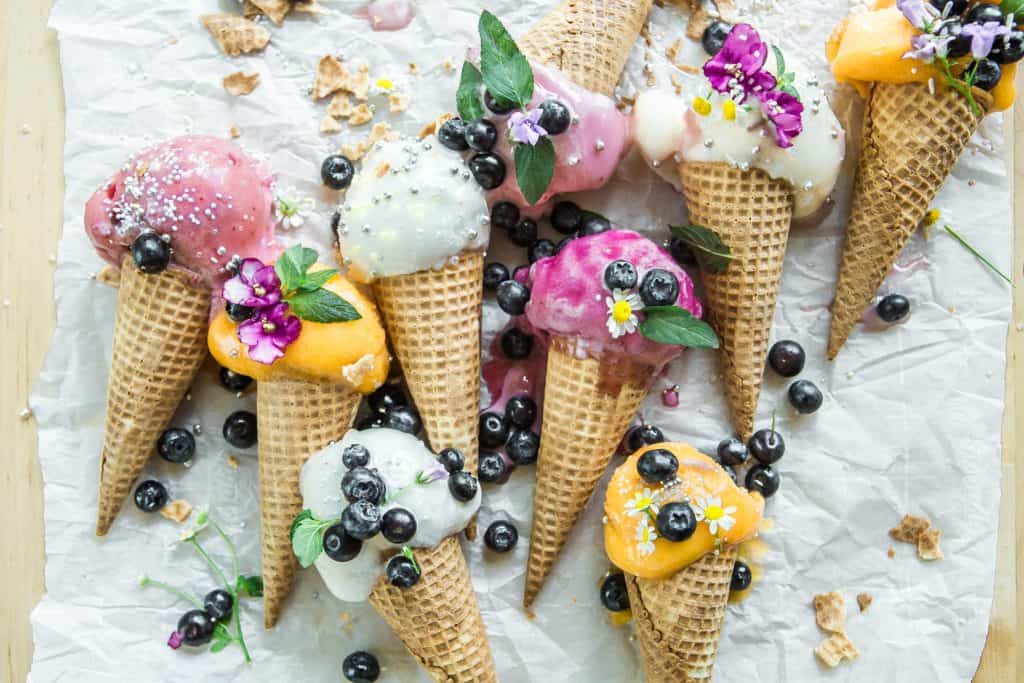 A solution, on the other hand, is a combination of substances that are completely dissolved and can no longer be separated. It is a homogenous combination in which the components that make it up to have chemically bonded together.

Ice Cream Is an Emulsion

Ice cream is a specific kind of mixture, an emulsion. An emulsion is a combination of two or more liquids that usually don’t mix. In ice cream, these elements are fat and water, with tiny fat globules dispersing throughout the water. The basic components of ice cream are air, ice crystals, fat globules, and liquid syrup. The fat comes from one of the main ingredients in ice cream, the cream. The water is in the form of ice crystals.

The fat content in the ice cream determines how rich and silky it will be. Low-fat ice cream is usually coarser and harder, and it generally melts faster than ice creams with higher fat content.

Ice crystals grow in the ice cream mixture as temperatures are lowered. The process of growing these ice crystals is called propagation. A few types of ice cream rely mainly on ice crystals, with little or no dairy. Sorbets include no fat or milk, while sherbets include some milk or cream.

Emulsifiers are used in ice cream to give it its creaminess. They also help slow down the process of melting when you eat the ice cream. These emulsifiers are what stabilize ice cream as an emulsion.

In an ice cream mixture, it is the milk proteins that absorb the surface of the fat globules and provide the desired stability, so other emulsifiers are not generally needed for this purpose. They may be added, however, to displace proteins from the fat globules. Emulsifiers also absorb liquid from the ice cream and lock it into place, stabilizing the structure of the mixture. 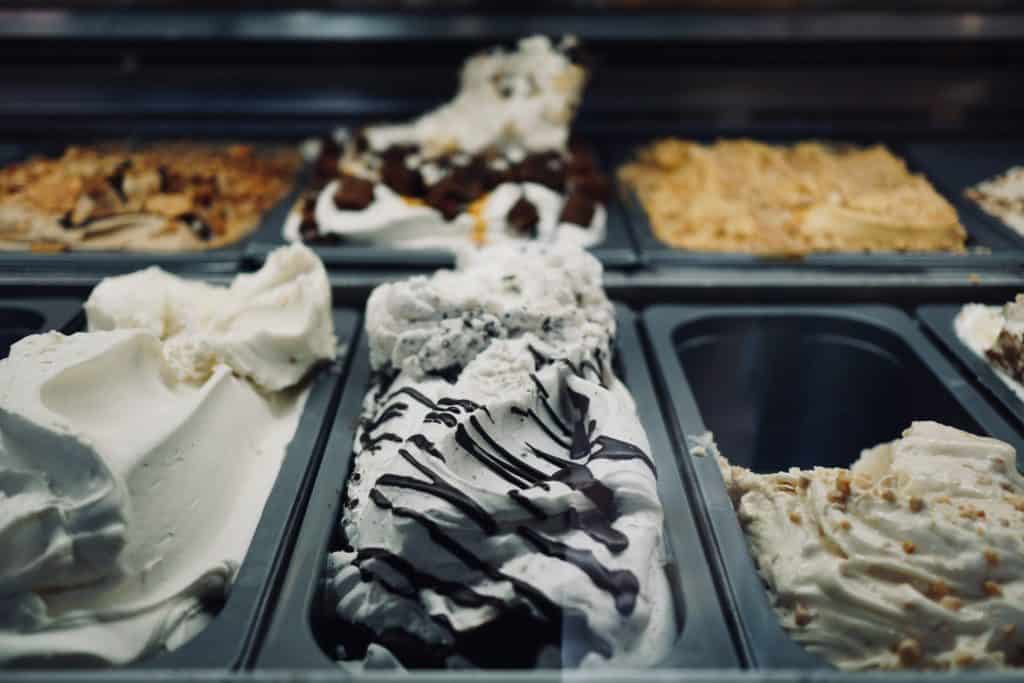 The types of emulsifiers used in ice cream are small-molecule surfactants, phospholipids, proteins, and polysaccharides. Gelatin and egg whites are commonly used emulsifiers in ice cream, along with various types of gum or seaweed extracts.

Ice Cream Is a Colloid

An even more specific description of ice cream is that it is a colloid, with the fat globules suspended in the ice crystals. Ice cream is a complex food colloid in which the emulsion creates a dispersion of air bubbles. In the freezing process, another dispersed phase of ice crystals is formed.

There Are Four Main Components in an Ice Cream Mixture

Ice cream is a mixture that includes four main components:

Though the components of ice cream are relatively simple, and though there are no chemical reactions that occur when making ice cream, there is plenty of chemistry in the ice cream making process. The colloidal structure of ice cream is an example of a complex chemical structure.

As mentioned earlier, the structure of ice cream is a key part of its taste, so the chemistry involved in creating the ice cream’s structure is of great significance. The key is to get plenty of air into the mixture so that the fat globules will coalesce. At the same time, the fat globules stabilize the air bubbles. When ice cream starts to melt, the air is released, turning it into a watery, runny mess rather than the creamy, thick dessert loved by so many.

Whipping is what makes ice cream so aerated, putting the high air content into the mix to create its creamy texture. The mixture is frozen at the same time that it is aerated, creating the other main component in ice cream, ice crystals, to go alongside the fat globules and air bubbles.

Ice crystals don’t begin to form in ice cream at 0°C (32°F). It must be brought to an even lower temperature, a result of the sugars and salts contained in the mixture. Ice cream is typically served at -16°C (3.2°F), but even at this low temperature, the water is only just over 70% frozen. If it gets much colder than this, though, the ice cream becomes hard and is difficult to scoop.

Ice cream is one of the simple pleasures of everyday life, but its chemical makeup is actually quite complex. Understanding the structure of ice cream and how it is made gives some insight into basic concepts of chemistry, such as what goes into making a mixture. The science behind ice cream making is a fascinating topic. It’s no wonder there are so many types of ice cream available.

If you’d like to learn more about the chemistry behind the making of ice cream, you might enjoy Dr. Ainissa Ramirez’s description of how ice cream is made on YouTube: