Many of us enjoy sitting around a warm fire and watching the flames dance and flicker. But have you ever stopped to consider just what in the world of physics you’re looking at?

Fire is a chemical change, known as combustion, that occurs when sufficient heat is applied to fuel in oxygen. Chemical changes cause alterations of molecular compositions. This differs from a physical change, where only an object’s physical properties are altered.

Understanding the science behind this isn’t complicated, but the science lingo is. However, this article makes it simple. It’ll explain the difference between physical and chemical changes, then put that up against science’s definition of fire to determine why it’s a chemical change, and by the end, you’ll be able to make rainbow-colored flames, should you have such a burning desire. 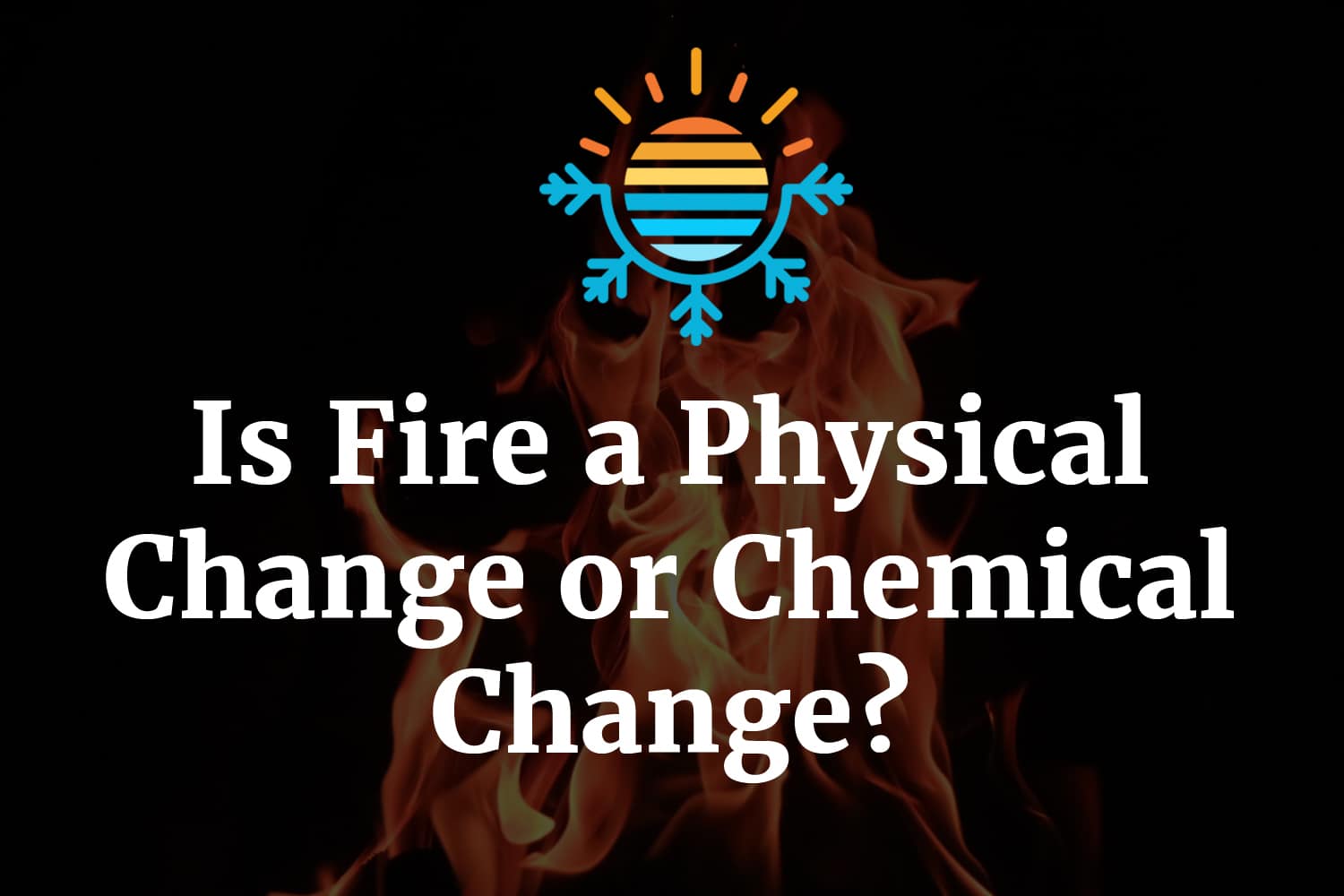 What Is Physical Change?

A physical change is characterized by a metamorphosis occurring in which matter retains its molecular structure. It does not alter its chemical composition. With this in mind, the transition of a pure substance between the phases of matter (solid, liquid, and gas) is considered a physical change because the matter’s identity is not modified.

A physical change is what it is: there is a change in the physical. Matter has its shape, appearance, or adaptability somehow affected, and often we can see and/or feel that this physical change has occurred, or is occurring.

A prominent characteristic of physical change is that the alteration can usually be reversed or undone. More importantly, the object is still the same, but in a different physical state.

An everyday example of such is the turning of water into ice. When you fill an ice cube tray with water and put it in the freezer, the low temperature will cause the water to endure a physical change, and in a few hours, it becomes ice.

If we take the ice out to sit on the counter, the warmer air temperature will cause that ice to melt over time. Thus, a second physical change occurs. It’s important to note that the water’s molecular structure, or chemical identity, is still the same, two hydrogen molecules and one oxygen molecule, regardless of its physical state.

Here are a few more everyday examples of physical changes.

You’ll notice, committing one of these acts does not produce something new. A crushed can is still a can, and a cut apple is still an apple.

Simple enough, right? Continuing, we will consider the opposing option, which is chemical change.

What Is Chemical Change?

Chemical changes, aka chemical reactions, result in creating one or more substances that differ from the original substances’ chemical identities compared to prior to the reaction. This new substance has different physical properties due to the rearrangement or break-up of its molecules.

When two or more substances come together, they can react with one another that changes into something new. This is known as a chemical change or commonly known as chemical reaction. Notably, these changes are permanent. However, there are a few exceptions that require an alternative chemical reaction to change it back.

Chemical reactions can produce heat or light, bubbling or fizzing, or even smoke or fire. On that note, combustion, also known as burning, is a particular and common chemical reaction. Changes can be measured, differentiated by new physical properties like or flammability.

Compared to physical changes where our things remain intact, chemical changes are more like magic or alchemy. There is a transformation in where something that once was is no longer.

Let’s keep going by examining the object in question, which is fire.

Fire results from combustion that occurs from oxygen and fuel, such as gasoline or wood, coming together with energy that is usually extreme heat to produce the reaction. Flames are produced when the fuel is heated to its ignition temperature. This burning process will continue as long as oxygen or fuel remains.

There was an important word from science in that explanation, did you catch it? Combustion. And as we learned in the last section, combustion is a chemical reaction. Science also said the flames are produced. Ergo, fire is a new thing created as a result of a chemical reaction.

Think about all the times in your life you’ve experienced the creation of flames. How about that summer bonfire? You put wood fuel in a pile outside that is surrounded by oxygen, but it doesn’t produce fire until you introduce heat, which causes the combustion of the wood to occur.

The burning continues until the wood is gone or has undergone a complete chemical change that results in ashes and char, which no longer have the same physical properties of flammability as the wood did.

If you own a gas stove or propane grill, you create a chemical change in the fuel when you ignite it, either by lighting it with something already burning or a pilot light creating a spark.

That fire will continue until you turn off the burner or your propane tank runs out, effectively cutting off the reaction by removing a required element. Using a lighter is the same principle. As another example, Matches use friction to create heat needed to ignite the chemicals on the match head, resulting in fire. In a few seconds, the chemicals are burned off, which is the fuel, and the fire goes out.

Did you know fire can burn with different colors? Perhaps you’ve seen a blue flame before. This is because fire emits different colors based on how much heat is applied or the object. Sometimes this is a natural reaction, and sometimes it is chemically induced. The table below shows different substances, where to find them, and the color flame produced during their chemical reaction.

Curious to try? I suggest watching this quick video for specific household items to use and safety tips, of course.

Want to have rainbow fire without the DIY experiments? You’re not alone. Making colored flames is so popular that it has moved out of science labs and retail shops across the land. For example, Magical Flames is a pouch of various chemicals that all burn with different colored flames. Toss it in your fireplace or campfire and enjoy the show.

Fire is the result of a chemical change called combustion. It is not a physical change because the elements undergo an alteration of their molecular composition. Furthermore, fire can exist on either side of a chemical change in that it can be the consequence or the catalyst, and in some cases, both.