We all know that ice floats, but what happens when the water surrounding that ice is hot? Does the ice melt straightaway? Since, as we might vaguely remember from science class, heat rises, wouldn’t it make sense for the hot water to rise over the cold ice?

Ice does indeed float in hot water. This is due to the differences in density and molecular structure between water as a liquid and water as a solid (ice). Hydrogen bonds make ice less dense than liquid water, even hot liquid water, causing ice to float.

Density and molecular structure are linked. (Also, heat itself does not rise—hot air does!) Below, we’ll take a look at how both properties work to affect the peculiar and life-sustaining behavior of H20. 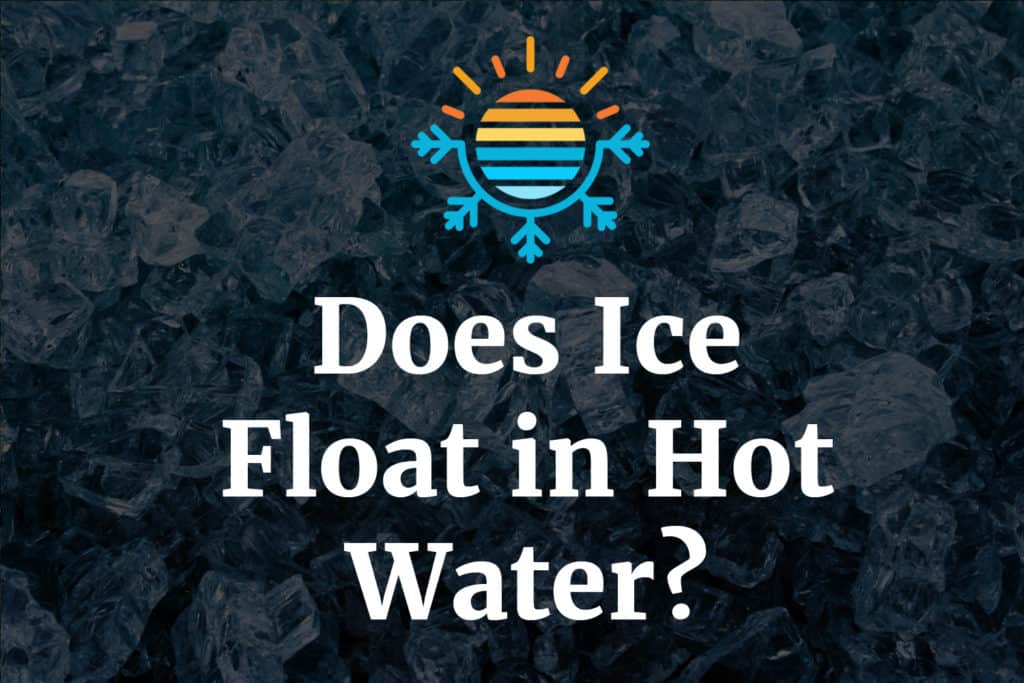 The Density of Water

But before we dive into the specifics of water, it’s helpful to clarify: What exactly is density?

“In practical terms, density is the weight of a substance for a specific volume,” explains The United States Geological Survey. “As long as an object is made up of molecules, and thus has size or mass, it has a density. Density is just the weight for a chosen amount (volume) of the material.”

To place this in an everyday context, try picturing lead and styrofoam. Lead is a dense substance (take any amount or volume of lead and it will feel weighty), whereas styrofoam, with its air bubbles, is not very dense at all.

But water’s density changes as the temperature changes. Consider the following:

You can see this in action in a brief video that captures an ice cube floating in a pot of boiling water:

But now that we have, quite literally, seen ice to be less dense than water, the question is: Why is this the case?

The Molecular Structure of Water

Water’s molecular formula is so well-known it can be used as a synonym for water without causing any confusion. But there’s more than shorthand to H₂0.

Just like all molecules, H₂0 is a cluster of two atoms or more that are linked via chemical bonds. It is of neutral electric charge.

The chemical bond that links the oxygen and hydrogen atoms together within a single molecule is called a covalent bond. Covalent bonds are relatively strong. But what interests us more are the bonds that form between the molecules themselves. These intermolecular bonds help determine how dense water is at its various stages (solid, liquid, gas). 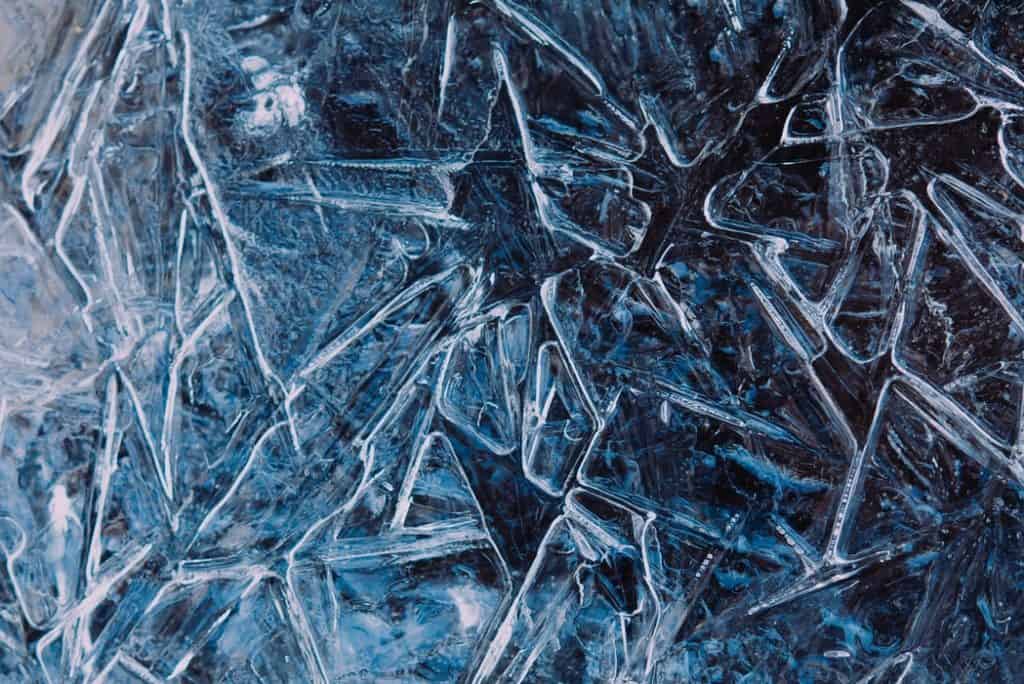 A connection between two water molecules occurs when the positively charged hydrogen atoms in one molecule attract the negatively charged oxygen atom in another. The bond that forms between the molecules, linking them together, is a hydrogen bond.

This molecular movement is called kinetic energy. Temperature can increase or decrease kinetic energy (essentially, how fast or slowly the molecules move), which in turn affects the density of water. As we’ll see, it’s all connected.

Kinetic energy increases, or the molecules in water move faster and faster when the temperature is raised.

When water is boiled, for example, the molecules move so quickly, and the kinetic energy is so high, the hydrogen bonds linking the molecules together break totally. The molecules are then released into the air as gas or steam. Water is at its least dense when it is a gas.

Conversely, when the temperature begins to drop below 4℃ (39℉), kinetic energy also decreases, causing the molecules to move more slowly.

You can think of these molecules as being sluggish in the cold—they don’t have the same vigor to form and break bonds as they did when their (kinetic) energy was higher.

Water Is Different Than Other Elements

When other elements lose their kinetic energy like this, they pack more tightly together. Once again, they don’t have the energy to zip about “in the cold.” Instead, they huddle and become denser in their solid form than they were as a liquid.

But not water. Water is different. 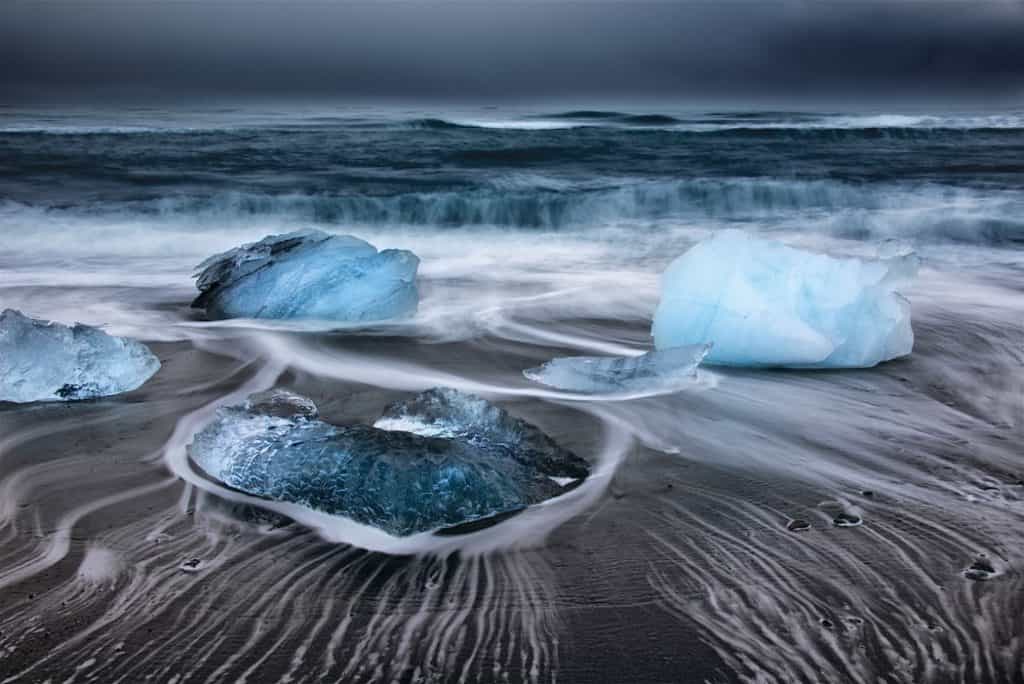 When water freezes and becomes solid, turning into ice, the hydrogen bonds between its molecules “form hexagonal lattice structures.” These structures place distance between the molecules’ negatively charged hydrogen atoms, keeping those atoms apart. The molecules are themselves thus situated further apart within the ice. More space between molecules results in lower overall density. (Think of the air bubbles in styrofoam.)

In other words, thanks to its “lattice” molecular structure that holds its molecules further apart, ice is less dense than liquid water.

It is interesting to note that the hot water with which we began our investigation is itself less dense than cold water. In hot water, molecules have the kinetic energy to spring off each other, moving further away from each other. They don’t move as quickly, or travel so far apart, in cold water.

If you were to compare the same volume of hot water with cold water, you would find fewer hot water molecules. It’s a little less dense.

However, hot water is still denser than ice. The molecules in liquid water will always lack the “lattice” structure, with its empty air spaces that comprise ice. That is why, no matter the temperature of the liquid water that surrounds it, ice will always float.

What does all this mean, practically speaking, for the world in which we live?

Ponds and lakes and seas are several of the more visual beneficiaries of water’s peculiar properties. When temperatures reach the freezing point, the surfaces of these bodies freeze, forming a layer of ice. The water beneath this layer remains in its liquid form. Insulated by the ice above, all of the aquatic life can continue to survive in the liquid water throughout the winter.

If ice didn’t float, the frozen surface of a pond would sink directly to the bottom. The layer of water that then became the new surface would freeze and sink as well. This process would repeat until the entire pond—and with it, all of its plants and animals—froze.

Unlike other elements, water does not become denser when it solidifies. Thanks to the “lattice,” spread-out arrangement of the hydrogen bonds between its molecules, water’s solid form (ice) is less dense than its liquid form.

That’s the technical explanation for a strange and wonderful phenomenon: ice floating in hot water.