Dry ice is one of the most popular preservatives in the food industry. While the FDA approves it, you can’t help but wonder if it affects the taste of the food.

Dry ice doesn’t affect the taste of food but helps the food remain fresh and retain its full flavor. With a temperature of -109°F (-78°C), dry ice flash freezes fruits, meats, and vegetables. The frigid temperature keeps the fats in stored food from going rancid while arresting bacteria growth.

The rest of this article will explore a few topics related to this question in great detail, including how dry ice is made, how it works as a preservative, its use in food establishments, dangers it poses, and how to handle it safely. 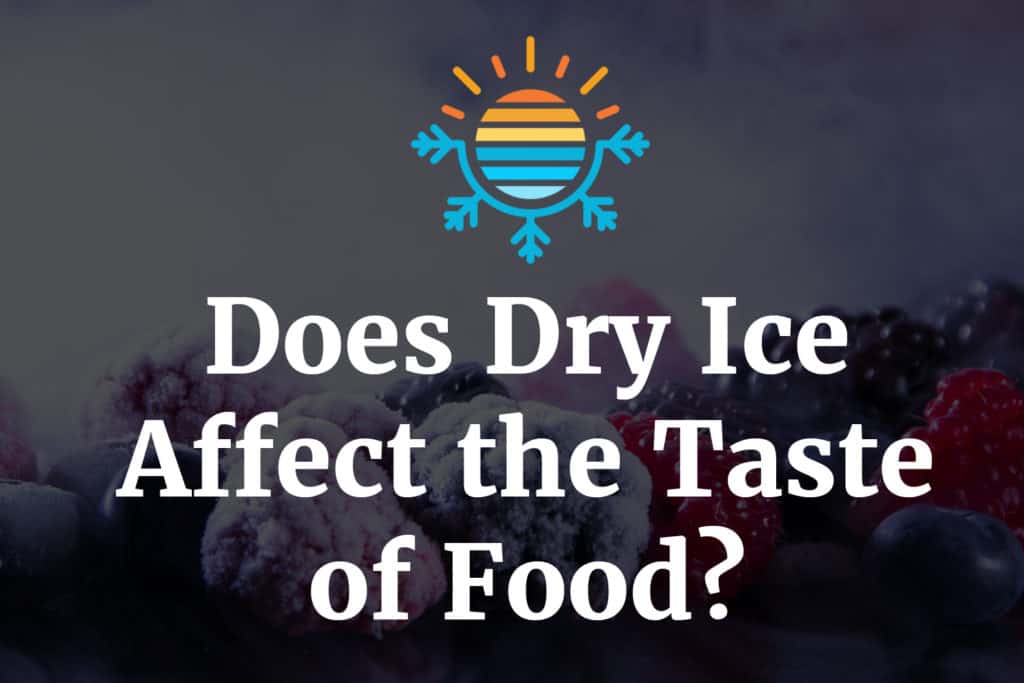 Due to its unique characteristics and extremely low freezing point, dry ice is the perfect flash-freezing medium. Flash freezing is the process of freezing food items quickly at extremely low temperatures.

Due to the low temperatures, flash-frozen foods are remarkably different from those frozen using a standard freezer.

For instance, freezing a pound of meat in your freezer is a process that takes several hours. As the meat freezes, ice crystals form between the fibers, and they force the nutritious juices out. The lost juices from the reddish fluids leftover when thawing meats.

In contrast, flash freezing takes place so quickly that no ice crystals form between the fibers. The speed at which it happens allows the foods to remain fresh and retain all flavors and nutrients.

Clarence Frank Birdseye, considered the father of the frozen food industry, developed the flash-freezing concept to ensure a steady supply of fresh vegetables in winter.

A quick look into dry ice unique characteristics and composition can help to shed light on why it’s a stellar food preservative.

Dry Ice Is a Frozen Gas

Dry ice is the solid form of carbon dioxide, the gas that’s used to make fizzy drinks such as soda. Raw carbon dioxide is compressed at between 1500 and 2200 psi then cooled to form liquid CO2.

When released into a non-pressurized environment, liquid carbon dioxide turns into dry ice snow. The dry ice snow is compressed into pellets and blocks that are then sold to consumers.

When carbon dioxide is compressed, it reduces in volume, and the temperature drops drastically. The result is a compact white solid with an uber low freezing point.

The production method makes dry ice an excellent preservative as it comprises purely frozen carbon dioxide gas. It has no other additives.

Unlike regular ice, dry ice doesn’t melt at room temperature. Instead, the ice block undergoes sublimation to become a gas after absorbing heat.

Dry ice derives the name from the fact that it doesn’t create a wet mess once it melts. It also takes longer to ‘melt’ compared to regular ice.

The difference in the melting speeds between dry ice and regular ice boils down to the heat-conducting capacity of water and air.

Unlike air, water is a good heat conductor, i.e., it loses and absorbs heat quickly. It also has a higher freezing point compared to carbon dioxide.

Since water gains heat quickly and ice just a few degrees below zero, it doesn’t take long for the ice to gain heat and melt.

Dry ice also lowers the temperature of the surrounding air, further slowing down the rate of sublimation.

Carbon Dioxide Is an Inert Gas

Carbon dioxide belongs to a group of inert gases, including helium, argon, and neon, known as Noble gases. Carbon dioxide is non-flammable, non-toxic, non-reactive, colorless, and has a faint odor.

Carbon dioxide’s physical and chemical characteristics make it harmless to foods. When used as a preservative, dry ice turns into the harmless gas before dissipating harmlessly into the atmosphere.

The Verdict: Dry Ice Doesn’t Alter the Taste of Food

From a technical standpoint, dry ice is a freezing agent with a low freezing point. The compound is so cold that its flash freezes any food that comes into contact quickly. 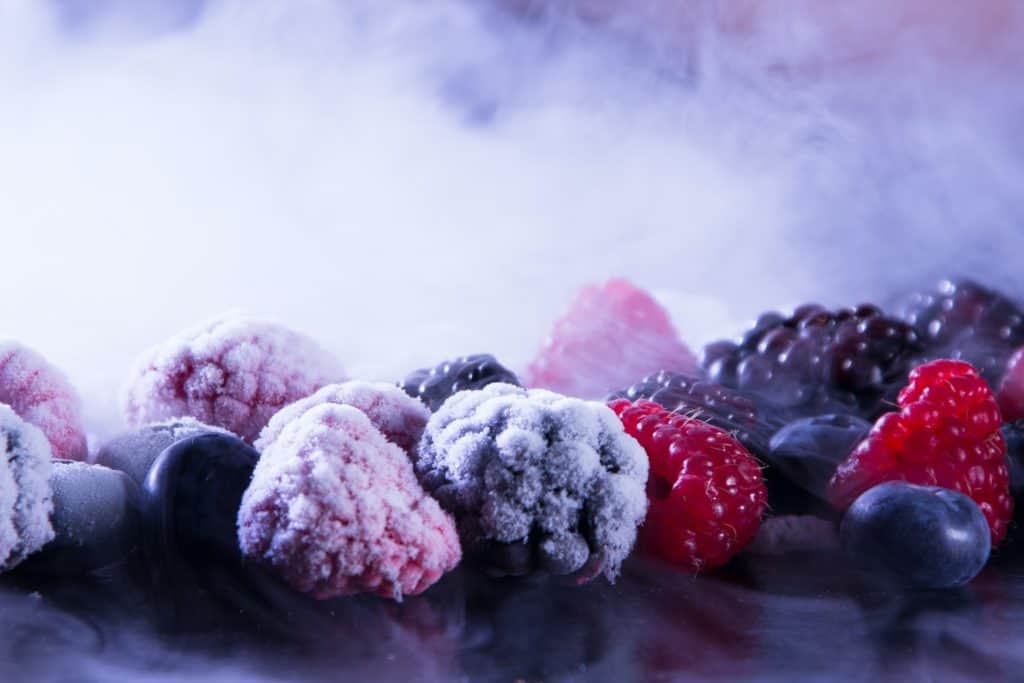 Flash-frozen foods remain fresh for longer and retain most of their nutrients, which makes them tastier and enjoyable.

When dry ice sublimes, it becomes carbon dioxide, an inert gas that doesn’t affect the food’s taste or chemical composition.

Therefore, food preserved in dry ice might taste better, but that would be as a result of the rapid freezing process.

Can You Put Dry Ice in Foods and Drinks?

Frozen carbon dioxide is prevalent in the culinary industry, where it has several uses. Because they don’t melt into a puddle, dry ice pellets are used to make cocktails.

In the presence of water, dry ice sublimes visibly to create a thick cloud of smoke. The clouds comprise water droplets trapped inside the rising carbon dioxide gas.

Due to its extremely low temperature, dry ice is infinitely more dangerous than regular ice. Improper handling and ingestion of dry ice pose a grave risk to human health.

Extended contact of dry ice and bare skin leads to frostbite and can leave you nursing severe burns and scars.

Ingesting dry ice is infinitely more dangerous than handling it. The ice can freeze tissues in your mouth, throat, and stomach. However, subliming dry ice poses an even greater danger.

A gram of dry ice increases its volume 845 times upon subliming into gaseous form. The resultant gaseous carbon build-up can rupture your stomach, causing permanent injuries and possibly death.

The FDA’s Food Code doesn’t explicitly prohibit the use of dry ice in food preparation. However, it has issued a few advisory warnings to avoid potentially life-threatening injuries.

In food establishments, employees should:

If using dry ice at home, take these safety precautions:

From a technical standpoint, dry ice is a freezing agent that accomplishes three feats:

By flash-freezing fresh foods such as meats, vegetables, and fruits, dry ice ensures they remain fresh for longer while retaining their flavors and nutrients.

Since dry ice is frozen carbon dioxide, an inert noble gas, it cannot react with any food items. Therefore, dry ice is incapable of changing the taste of food.

However, flash-frozen food might taste better because it gets to retain all the nutrients and freshness.