Cooling down a room without windows is actually easier than you’d think. Though the options are a bit more limited than if the room involved had windows, it can still be done. It just takes a little bit of creativity and a couple of different appliances.

Here are 8 ways to cool down a room without windows:

Knowing which option(s) would work best for you depends on where the room is that you’d like to keep cool. Certain tactics work for a room regardless of where it is in the house, whereas other tactics work best under certain circumstances. 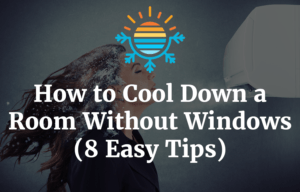 Table of Contents hide
1. Get a portable air conditioner.
2. Use ice! (and a fan).
3. Use two fans (and position them correctly).
4. Install a ceiling fan or a whole house fan.
5. Invest in central air conditioning.
6. Consider alternative light sources.
7. Close the door if it’s near a window that shines any light into the room.
8. Focus on keeping yourself cool as opposed to keeping the room cool.
Final thoughts

1. Get a portable air conditioner.

Portable air conditioners are also sometimes referred to as ventless air conditioners or spot coolers. They come in various “strengths” (known as BTU’s) to accommodate many different sized rooms.

These air conditioners are designed like any other in that they need an outlet for the hot air that they suck in. Because there will be no windows in the room, the air conditioner will need to be vented either through the ceiling or a door.

The benefit to this option is the ability to take the air conditioner with you to any other room with or without windows that also might need to be cooled down. However, it should be noted that portable air conditioners usually start at around $150 so if you’re on a budget, you might want to consider some of the other options I’ve listed.

This old school trick might just be easiest and the cheapest of all the suggestions. All you need is any sized floor fan and a bowl of ice. Simply put the bowl of ice behind the floor fan, turn it on, and set the fan in your direction so that you feel the most immediate effects.

If you are using a tall stand-up floor fan, make sure you have a nightstand of some kind of end table of equal height to put the bowl of ice on  When the ice melts, replenish and continue as you did before. This can be done with as many fans as you desire.

3. Use two fans (and position them correctly).

This is a lesser-known trick that works just as well. If you place a fan directed at the ceiling and a second fan facing out the doorway, the circulation pattern it creates drives all the hot air out the door and leaves the room much cooler.

In order for this to work effectively, the door will need to be shut as closely to the fan as possible to keep as much air from coming back in as possible. If you leave the door open it will defeat the purpose of what you are doing because it will continuously be letting hot air in from the outside. If the door won’t stay shut, consider putting something behind it to keep it in place.

4. Install a ceiling fan or a whole house fan.

A ceiling fan is a good option that can be purchased at around $60 for a basic model and can be installed fairly easily. A whole house fan costs a bit more, as it stars at around $300, but works with the whole house instead of just one room.

Though the ceiling fan doesn’t actually make the room cooler, it does make you cooler. It moves the stagnant air around the room and creates a nice breeze similar to if you were out on a hot day; the day doesn’t get cooler when the wind blows, but it sure does feel nice.

A whole house fan is a bit different. It’s placed in the attic, usually in the hallway, and sucks all the hot air up and out. This option is very circumstantial. In order for this to be effective, the outside air needs to be cooler than the inside air and any doors or windows need to be opened to feel its effects. This way the fan whole house fan can pull the air from outside through the windows and doors and create the influx of cooler air.

Central air conditioning is by far the easiest way to cool a room without windows, but it is also the most expensive option and can not be installed without experienced personal. Regardless it might just be worth the hassle.

The benefit to central air is that it can cool multiple rooms without windows at one time without taking up all your outlets. Trying to cool down multiple windowless rooms any other way would involve either a lot of fans or a lot of portable air conditioners which could also end up being pricey anyway.

Going with central air conditioning and eliminating all the extra time and effort of other methods would easily be the better choice for people who are able to spend the couple extra dollars.

Depending on what you will be doing in the room, you may want to consider limiting your lighting or finding creative ways to brighten your space. Turning on lights creates heat so if you must turn on a light, make sure you are using an LED bulb. Unlike traditional bulbs, these types of bulbs use less energy and give off little to no heat at all (which means you save money!).

To further reduce the risk of heating up the room, try using a lamp with a shade as opposed to using recessed lighting. The shade will trap any heat and keep the room cooler.

7. Close the door if it’s near a window that shines any light into the room.

As I have mentioned in some of my prior suggestions, light equals heat. If there are any windows outside the room that shine into the room, your best option is to either close the door or to put blinds or blackout curtains on the window to filter the light a bit and stop it from coming into the room.

8. Focus on keeping yourself cool as opposed to keeping the room cool.

If all else fails, focus on keeping yourself cool. Drink some ice water, put a wet cloth around your neck, or wear the lightest clothes you have.

Exercising all three of these things at once could keep you just as cool as many of the other options would. You can also utilize this option while utilizing another option as well, it’s all up to you and what you’re most comfortable with.

Now that you have all the options laid out in front of you it’s time to go experiment. I suggest starting with whatever costs you the least amount of money and going on from there. No need to spend more money if you don’t have to. Good luck!