When summer rolls around, there are going to be a lot of sweaty nights where you’ll have to sleep with either your window or your fan open. Some nights you might even consider doing both, only to find yourself confused if that’s going to render your fan ineffective.

In this article, we will explore this topic in detail. We will analyze the working mechanism of a fan, which will hopefully help you realize why it’s not the greatest idea to close the window when you’re using one. 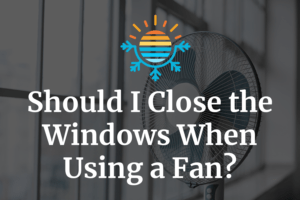 Table of Contents hide
Why you should keep the windows open when using a fan.
How does a fan actually work?
How does this differ from an air conditioner?
Window closed? Combine your fan with some ice.
Is it okay to sleep with your fan on?
Conclusion

Why you should keep the windows open when using a fan.

It is always a good idea to leave the window open when you’re using a fan. This is because a fan works by moving the air around, and if you cut off the source of fresh air, the fan will keep circulating the same air around. While this isn’t necessarily harmful, it will eventually make the air in the room stuffier.

The ideal position for a fan would be by an open window, with the fan’s front (counter-intuitively) facing the window. This positioning would result in the hot air being pulled out from the room, while the fresh air from outside replaces it. The fan will maintain a constant circulation of fresh air in the room.

But what will actually happen if you keep the doors and windows closed while you turn on the fan? There are a lot of rumors regarding this matter circulating around, some as serious as the possibility of dying.

One extreme example comes from Korea, where some people had a superstitious belief called “fan death,” which said that leaving the fan open with the doors and windows shut can kill you. Experts had traced the origin of this superstition back to the 70s when the Korean government was trying to get its citizens to spend less electricity. But the claims of “fan deaths” couldn’t be further from the truth.

As we shall see in the next section, a fan doesn’t actually make the room any cooler; it just moves the air around. So there is no chance of you dying from hypothermia. And as for the possibilities of suffocating, well, most domiciles aren’t actually airtight, so there will still be a pretty good circulation of both oxygen and carbon dioxide.

How does a fan actually work?

A fan works by moving the air around. This movement of air creates a breeze, which interacts with the sweat your body naturally produces. The evaporation of sweat creates a cooling effect in the process. Think of a hot summer day in the outdoors, and the coolness you feel when a gust of air blows in your direction. Fans work pretty much in the same way.

The rotating blades pull the warm air from the back of the fan. This air is then rapidly thrown in the forward direction, which causes the movement of air. And if the window is kept open, the air being pulled in is fresh. This will result in fresh air circulating around the room.

How does this differ from an air conditioner?

An air conditioner, on the other hand, works in a completely different fashion. An AC will actually cool the hot air in the room, decreasing the overall temperature of the room to create a cooling effect. The cooling effect from an air conditioner occurs because the device has a refrigerant and some coils inside it. The hot air is pulled in via a fan, and the cold air is released via another fan.

So naturally, an air conditioner consumes a lot more energy in its regular mode. There’s a lot more happening than just a motor moving the blades of a fan around.

One interesting thing that needs to be pointed out here is, unlike fans, air conditioners, given how they operate, actually need the windows and the door in the room to be closed for maximum efficiency. So if you use an air conditioner, you should keep your windows shut.

Window closed? Combine your fan with some ice.

We thought it would be suitable to share a nice little hack here, one that somehow seems related to the main question in this article.

Say you need to keep your window closed for whatever reason (maybe noise, dust, insects, etc.). If you keep a fan running in a closed room for long enough, the air is gradually going to get warmer and warmer. Fortunately, there’s an easy hack you could use here.

A word of caution: Keep the bowl of ice and water at a safe distance from any outlets.

Is it okay to sleep with your fan on?

One question that a lot of people have is whether or not it is okay to sleep with a fan running.

You can sleep with your fan on; however, you need to make sure you’re sufficiently hydrated.

As we discussed earlier, a fan works by creating a breeze that evaporates the sweat produced by your body. If it is sufficiently hot, your body will keep producing sweat, and the fan will keep evaporating it. Overnight, this could result in a significant loss of fluids. However, this is something you could recover from with a nice glass of water in the morning. So don’t worry about it too much.

Still, it is wise not to have the fan pointed right at you. Keep it at a good distance, and leave it in oscillation mode.

If you want to stay cool at night, the best thing to do would be to keep the window open and place your fan with its front facing the window. This will help replace the hot air inside the room with the cool air from outside and prevent you from drying out too much.

While there’s nothing wrong with closing the window when you’re using a fan, you’ll make the most of its cooling potential if you leave the window open. This is because a fan doesn’t actually make the temperature of a room cooler like an air conditioner does. It just moves the air around, creating a breeze that interacts with the sweat in your body, creating a cooling effect. An open window would allow the circulation of fresh air in your room.

The ideal setup would be leaving the window open and placing your fan with its front facing the window. This will push the hot air out of the room.