Many dishes require you to cook them for 8-10 hours or more, which is why a lot of people prefer leaving them inside the oven overnight. But then you have stats like 49% of all home fires in the US are caused by cooking. So it’s natural to wonder about the safety of leaving an oven on overnight.

You can leave an oven on overnight, but it isn’t recommended since you’ll be asleep and unable to take action in case of any mishaps. If there’s food cooking inside the oven, or you’re using a gas oven, there’s a chance of a fire breakout or carbon monoxide poisoning if it’s left running overnight.

In this article, I’ll give you a detailed overview of the dangers of leaving an oven on overnight and what to do if a mishap occurs. I’ve also shared a quick list of preventive tips you can follow to make overnight oven cooking as safe as possible.

How Long Can You Leave an Oven On?

You can leave an oven on for about 12 hours, albeit not unattended. Most modern ovens have a built-in timer that’ll automatically turn off the oven after it’s been on for 12 hours. If your particular model lacks this feature, remember to turn off the oven before it hits the 12-hour mark.

If there’s nothing inside the oven, you can theoretically keep it on for longer than 12 hours. Modern ovens have built-in safety precautions that can help prevent a fire from breaking out, provided the oven is empty though running.

The main danger comes when something you’re cooking inside the oven gets too hot and catches fire. As such, you shouldn’t leave the oven running for so long that whatever you’re cooking gets burnt and begins to smoke or create a fire.

What Are the Dangers of Leaving an Oven on Overnight?

The danger of leaving an oven on overnight is that you’re asleep, and it’s running unattended. If something starts to burn or a fire breaks loose, you won’t be there to stop it in time, and it can quickly get out of control. Carbon monoxide poisoning is another big concern.

Leaving an oven on isn’t a problem when you’re cooking for 10-12 hours during the day, since you’re awake and in the kitchen. This is why people don’t bat an eye when you’re making the Thanksgiving dinner, even though you’re keeping the oven on for extended periods.

However, it’s an entirely different story when you leave the oven on overnight and unattended, in which case there’s no one to prevent an accident.

In the following section, I’ve provided a more in-depth look at the dangers of leaving an oven on overnight. I’ve also shared the right way to react and handle a particular mishap if and when it occurs.

An Oven Left on Overnight Can Cause a Fire Breakout

If you leave an oven on overnight, with nothing inside and the oven door closed, there’s very little chance of a fire breakout.

In the case of an electric oven, the inside gets extremely hot, but if there’s nothing inside, nothing will burn and start a fire. However, if left running for a long time, a fire can start from an electrical malfunction or in the event of a power surge.

On the flip side, gas ovens use a flame to heat the inside to cooking temperatures. As such, there’s a slightly higher risk of a fire breakout with continuous usage — but only if the oven itself is damaged or poorly maintained.

That said, the risk of a fire significantly increases if something is cooking inside the oven, especially if parts of it are highly flammable.

For example, greasy or fatty food can easily catch fire if it gets hot enough. Also, if food crumbs fall on the oven floor, they can get extremely hot, charred, and start burning.

Now, if you leave your oven running overnight, something starts to burn, and you aren’t there to extinguish it immediately, the fire will grow and quickly get out of control.

How To Put Out an Oven Fire

If you find a fire inside your oven, how you should respond will depend on its severity.

Follow these steps if there’s only a small fire contained within the oven and it’s only letting out slight smoke:

On the flip side, leave the house as quickly as you can and call 911 or your local fire department for help if:

An Oven Left on Can Lead to Carbon Monoxide Poisoning

Carbon monoxide (CO) poisoning is another major threat that can occur from leaving your oven on overnight. That said, if you use an electric oven, you don’t need to worry about CO poisoning as it mainly occurs from gas-powered utilities, including gas ovens.

CO forms when a fire burns in the presence of limited oxygen. This releases CO into the air, which is a colorless and odorless gas, meaning you can’t detect it naturally.

Now, inhaling slight amounts of CO doesn’t cause major issues. However, if your entire house or rooms fill up with the gas, it can lead to CO poisoning, which can turn fatal. And since you can’t smell or see CO in the air, it’s often referred to as the “silent killer.”

The best way to safeguard yourself from CO poisoning is by installing a CO detector. The device will alert you if there are abnormally high levels of CO in the air. In such a case, you should take appropriate action to protect yourself and your family.

What To Do If Your CO Alarm Goes Off

If your CO detector alerts you about high levels of the gas inside your house, then open your doors and windows and ventilate each room. If you feel ill or experience a headache or breathlessness, go outside as quickly as possible and get some fresh air.

Call 911 if you or one of your family members feels extremely ill. Remember, CO poisoning is deadly and requires prompt action.

Also, it isn’t wise to go in and check what caused the CO leak in the first place. It could’ve been your oven or any other gas appliance in your home. It’s best to call in professionals and get everything checked out.

On the other hand, if you don’t have a CO detector, you need to be extra vigilant about the symptoms of CO poisoning. Take quick action if you experience any of them.

Here’s a quick look at the major symptoms of CO poisoning:

If you feel any of these symptoms and know that the oven has been running for a long time, assume the worst. Get out of your house, and call in the professionals.

How To Safely Use an Oven Overnight

In some situations, it might be necessary to leave an oven running overnight. In that case, you need to take proper precautionary measures to ensure there’s no chance of a mishap.

Here’s a list of things you can do to safely use an oven overnight:

Let’s go over each of these points in more detail.

When left on overnight, it isn’t the oven that catches fire, rather, it’s the food cooking inside the oven. As such, taking some minor precautions can drastically reduce the risk of a fire breakout.

Many people tend to keep the oven door open while cooking food. They do this thinking that the heat will help warm up the kitchen.

This is a bad idea.

First of all, the heat produced from an oven is an inefficient way of warming up large spaces.

Furthermore, by keeping the oven door open, you’re introducing a steady stream of oxygen, which can help ignite a flame or cause it to burn more furiously.

3. Set Up an Alarm or Timer

Most modern ovens have some option to set up a timer, after which it’ll automatically turn off the heat. If the dish you’re preparing only needs 5-6 hours of cooking, set a timer for that much time. Don’t keep the oven running overnight for 8-9 hours — especially if you fall asleep.

If your oven doesn’t have a built-in timer, then set an alarm on your phone. Wake up when the alarm goes off, go to your kitchen, and turn off the oven.

Yes, this is inconvenient, but it can save you from a flame that can potentially burn down your home.

One of the major worries of leaving an oven on overnight is the risk of CO poisoning. And since CO is colorless and odorless, you won’t notice it spreading across your home until you experience the early symptoms of CO poisoning.

As such, if you have a gas oven, and tend to cook overnight often, I’d recommend getting a CO detector if you don’t have one already.

The Kidde Carbon Monoxide Detector (available on Amazon.com) is an excellent choice if you’re looking for a recommendation. It’s relatively affordable and comes with battery backup, so you’re protected even during a power outage. 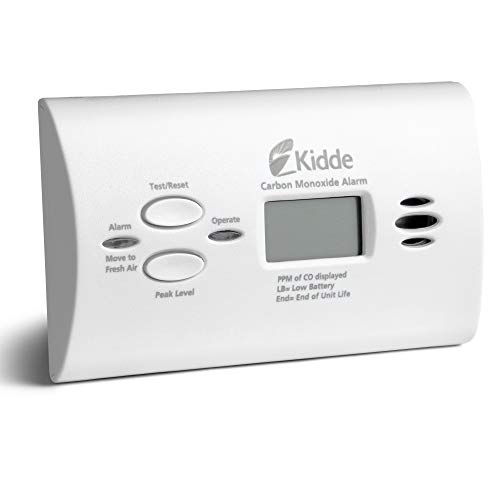 Other than this, always remember to routinely get servicing and maintenance for your gas-powered appliances. Old and damaged devices are the most common culprits of CO leakage.

As such, if you tend to leave the kitchen unattended, it’s a wise idea to install a smoke detector as a safeguard against any future mishaps.

I’d suggest getting the Kidde Smoke Detector (available on Amazon.com). It’s extremely affordable, has a battery backup, and lets out a loud 85-decibel alarm as soon as it detects smoke.

This should quickly inform you there’s a fire in your kitchen, so you can take prompt action before things get out of control.

Leaving an oven on overnight is risky if you’re asleep and there’s no one attending to it.

Prolonged periods of heating can burn the food, ultimately leading to a kitchen fire. There’s also the risk of CO poisoning if you’re using a gas oven.

That said, you can take proper precautions to mitigate such risks. Buy a CO detector and a smoke detector to enable you to safely use an oven overnight if you desperately need to.

If you ever have other difficulties with your oven, some of our other oven troubleshooting posts may be able to help: