The use of e-cigarettes has greatly increased in the last decade. From just 7 million users in 2011 to a massive 41 million global users in 2018, they are more prevalent than ever. But there are still safety questions for all brands, including Juuls, and one such issue is: can e-cigarettes explode?

There have been no reports to suggest that Juuls can explode, although there are some reports of e-cigarettes exploding. Juul uses a number of strict quality control measures they adhere to to ensure their products’ safety—from ‘impact and dropping tests’ to ‘temperature regulation testing.’

Given the sharp increase of users, especially younger users, it’s not surprising that regulations around the industry are quite strict. Let’s take a look at how e-cigarettes can potentially explode, how Juul differs from other e-cigarettes, and how the company has worked to ensure the safety of consumers when using their product. 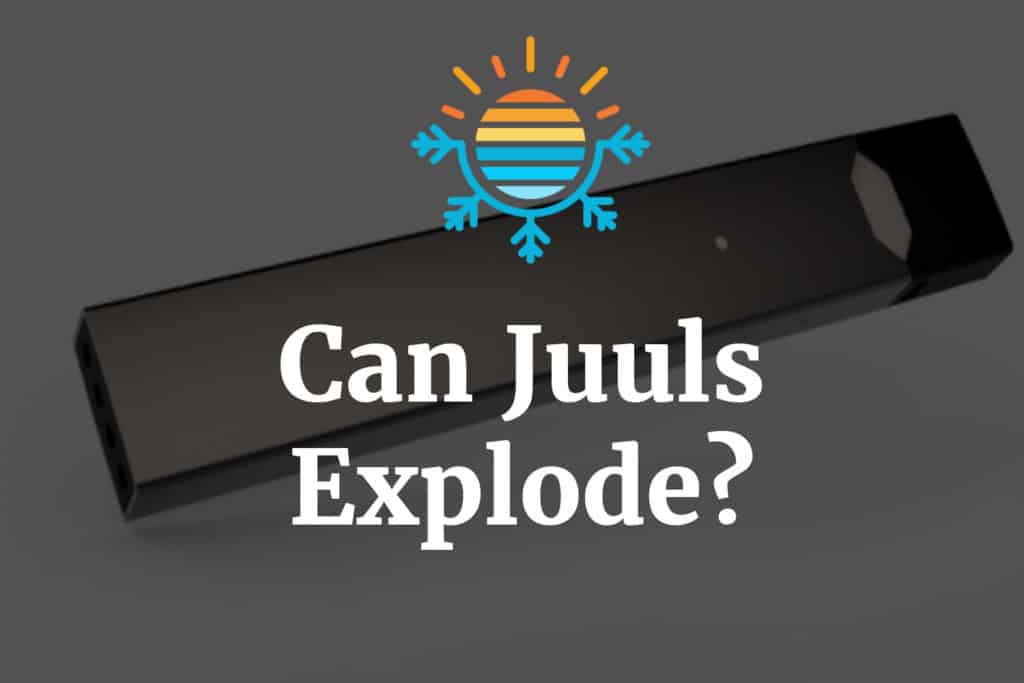 What Causes an E-Cigarette to Explode?

Along with the rise in usage, there has also been an increase in bad press for e-cigarettes. While some are concerned with the health effects on younger users, many people have expressed their fear of potential malfunctions.

Quite a few cases of e-cigarettes exploding have been caught on camera in recent years. In many of the videos, the e-cigarette is not in use, exploding seemingly out of nowhere. As mentioned in the video above, the cause of the explosions is either user error or the batteries.

The batteries used were chosen for their ability to store energy. However, they also have large output capabilities and, if not handled correctly, can become faulty. For example, frequently removing the battery to charge could cause a slight tear in the lining, which exposes the metal sleeve of the battery.

If the metal comes into contact with something conductive, it will short out. This includes the inside of the device and even a coin in your pocket.

Another issue with the battery is the fact that this specific battery, the 18650, cannot tell when it is done charging. Overcharging can cause an internal short, which can lead to combustion. But here’s the good news: Juul does not use the 18650 battery. In fact, the user does not come into contact with the battery at all. So let’s take a look at how Juul is different.

Watch this video for further information:

The appeal of Juul is its similarity to cigarettes. It is lightweight, and once the liquid pod is inserted, the device is ready. No lengthy instructions on how to assemble; just slip in the pod and start vaping. It also pulls like a cigarette, giving the sensation which is preferable for smokers.

Juul was designed to give the same mouth feel like a cigarette, meaning smokers will find the transition much easier. This, coupled with the fact it can slip into any pocket or little purse, it makes sense that Juul has become so popular.

How Do Juuls Work?

Juul pods contain a liquid that is a mixture of nicotine, glycerine, and artificial flavors. When attached to the device and inhaled, an inner coil heats up to create the vapor. It is one of the simplest e-cigarettes around and requires little to no assembly.

A starter kit will include the device, charging dock, and a selection of pods.

What Is the Difference Between Juul and Other E-Cigarettes?

Juul does not only differ from other e-cigarettes in terms of its looks, though its sleek design is one of the reasons younger users have turned to this device. The company also worked to create a safer battery and include technology to prevent potential issues.

Juul is much more simplistic in its design, with no buttons or switches, and an easy to use USB charging port. It looks like a slim thumb drive and is very discreet. But the design is about much more than just the aesthetic. Juul is made up of just two parts: the main section with the battery, and the liquid pod.

The battery is specifically designed to stay in place during charging. Other e-cigarettes often have removable batteries and safety locks that can be turned off. In addition, many have a button that needs to be pressed in order for the user to inhale. Potentially, this added button would cause overheating in the event it malfunctions.

Juul reduced the risk of malfunctioning buttons and safety locks being altered by taking those away completely. Instead, the device does the work for you and only heats the coil when it senses the user is taking a pull.

Most of the reported cases of e-cigarettes exploding have been linked to faults in the battery and how it is handled by users. The vast majority of safety precautions for e-cigarettes are centered around the battery. Using the incorrect power lead, charging for too long, and even storing extra batteries incorrectly are all issues that could lead to a malfunction.

Where other devices typically use lithium-ion batteries that need to be removed to be charged, Juul worked with the company to design a new battery. The idea is to create a battery that remained in place, therefore reducing contact with the user. They also have overcharge protection to avoid issues if the device is left to charge too long.

Inside of your Juul, you will find an airflow sensor and a small coil. This coil heats up and turns the liquid inside the small pod into vapor. Similar coils are used inside of other devices; however, with Juul, the user has no way of changing the settings. This regulating technology is specifically designed to avoid overheating, which, in turn, reduces the possibility of combustion.

To ensure their product is safe to use, Juul employs a number of safety measures. Key amongst them is their real-world tests. They perform impact and drop testing in order to gauge the damage done to the device and the effect on the battery. These tests are specifically designed to take real life into account and any damage that could be caused by a potential user.

They also perform ‘force-failure’ tests in order to push the device to its limits and record the effects. These tests are performed throughout the manufacturing process and continue after production.

Lastly, Juul continues its standard regulations through its supplier chain. From visiting supplier factories to signing agreements with sellers, they aim to ensure the quality of their product from start to finish.

How to Maintain Your Juul

Since the battery is not designed to be removed, you should have no reason to take your device apart. Its simplicity is one of the key features of the Juul and, therefore, it does not require much maintenance.

To clean your Juul, simply use a dry cotton swab to clean the charge port. If you have noticed a small amount of liquid in the air path, turn the device onto a tissue, and tap gently. It is not uncommon to get some leakage from the pods.

Though the pods do not have an expiration date, they are not designed to last forever. Ensure they are stored, unopened, in a dry environment.

With all the news reports of e-cigarettes exploding, it is not unreasonable to have reservations. But when comparing to similar products, it is easy to see how Juul has worked to ensure their users’ safety:

Despite the bad press surrounding e-cigarettes, Juul has worked hard to become a leader in the industry. They took a design that was bulky and made it sleek. They saw an issue with the batteries, and they worked with the manufacturer to remove it completely. As a product, Juul is very user friendly and seems to have the user in mind every step of the way.