Summer is just around the corner, and you’ve probably started considering your cooling arrangements for the season. Air conditioners are great, but a lot of people are going to go with the much more affordable fans and air circulators. Air circulators are marketed to seem fancier and much more sophisticated than regular fans, but are they?

In this article, we will explore this topic at a greater depth. We will explain both how a regular fan works and how an air circulator works. By the end, we will give you enough insight to help you decide which of the two is the better choice for you. 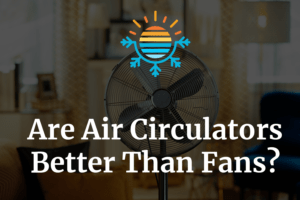 At first sight, both air circulators and fans look the same. And they’re designed for the same purpose: to keep you cool.

However, there is one key difference in how these two cooling devices work.

A fan will simply blow cool air in front of it. Of course, the air in the room as a whole is affected. But to feel any real benefit from a fan, you have to be right in front of it.

In contrast, an air circulator has been designed to move air throughout the entire room. This results in a cooling effect no matter where you’re standing.

Technically, both fans and air circulators work by circulating air around the room/vicinity. But air circulators have been designed to do this in a more even manner. Fans, on the other hand, will produce the most intense cooling effect right in front of them. Elsewhere, the temperature won’t really be affected.

Neither air circulators nor fans actually make the room cooler. In fact, in a closed room, they actually add some heat from their motor. These devices produce a cooling effect by moving the air around and creating a breeze. This then evaporates sweat from our skin, making the body feel cool.

For indoor use, air circulators are typically the smarter option. One major benefit is that unlike regular fans, they can be used all year round.

During the colder seasons, when you have your heater on, heat usually collects at the top of the room (since hot air rises). If you point an air circulator towards the ceiling and leave it on at a low speed, it will eventually redistribute the heat across the room.

The reason air circulators are better than fans at keeping the whole room cool is their 360-degree oscillation. While ceiling fans can oscillate 360 degrees as well, the air isn’t distributed nearly as well.

Yet another advantage of an air circulator is that they generally tend to consume less electricity compared to regular fans. So not only will you get an increased cooling effect, but you’ll be getting it at a lower cost.

So as you can see, operation wise, air circulators are clearly the better choice for indoor use. But this isn’t to say that regular fans don’t have their advantages.

Advantages of a regular fan.

While air circulators usually tend to do a much better job of keeping the whole room cool, their usability is limited to the indoors. You cannot use an air circulator to keep cool when you’re out in the open.

You can, however, use a fan when you are outdoors. And if it’s a fan with a misting effect, it can feel like heaven on a hot day.

And finally, if you’re alone in a room on a hot summer day, a fan blasting air in front of you could do a much better job of keeping you cool than an air circulator.

How do regular fans work?

One thing you should know about fans is that they don’t actually make the room any cooler. If anything, their motors add to the heat in the room (albeit very slightly). Fans work by blowing the warm, stagnant air around, and hence creating a breeze of air. This breeze evaporates the sweat we produce from our bodies, hence making us feel cool.

Why would you need to know all this, you may ask?

Well, think about this the next time you leave your room with the fan on hoping it will have cooled the room when you return. That’s not going to happen. Your fan works on your body, not on the general temperature of the room like an air conditioner would.

How do Air Circulators Work?

An air circulator basically works pretty much the same way a regular fan works. It moves the air around, creating a breeze. This breeze then evaporates the sweat your skin produces, hence giving you a cooling effect.

There are some who even argue that the term “air circulators” is nothing more than a clever marketing gimmick developed to help sell fancy-looking fans. But that would be taking it a little too far. Air circulators work great in big spaces such as factories, warehouses, and offices where you would have to install multiple fans to accommodate all the people spread across the given space.

The design of air circulators primarily focuses on moving the air all around the space, hence accommodating all the people in the room. Sure, the intensity won’t be as great as sitting in front of a table fan, but for the most part, it goes a long way toward keeping a room cool and comfortable. Besides, not a lot of people enjoy sitting directly in front of fans for too long.

One of the best things about air circulators is that they can be used all year round. Unlike a fan, whose primary purpose is to direct a breeze in a certain direction, air circulators work by moving the air around. So during cold seasons, when you have the heater on, you can direct an air circulator towards the top of the room (where the warm air tends to accumulate). This will create an even warm temperature throughout the room.

Both air circulators and fans have their own advantages. Among the two, air circulators are clearly the better choice for indoor use. They do a much better job of keeping the whole room cool, and they even tend to consume less electricity. Furthermore, they can be used all year round. During colder seasons, air circulators can help distribute warm air from a heater across the room.

For outdoor use, however, fans are the winners. Fans work by directing air in front of them. This is ideal for a hot summer day in the backyard. Air circulators, on the other hand, cannot be used in the outdoors. Fans also generally tend to be cheaper to purchase and are quieter than air circulators.