If you’ve ever sat near a fire, you probably noticed that the air around it looks blurry once the fire gets hot. But how and why does that happen?
Heat bends light due to a scientific phenomenon called heat distortion. Air density affects the speed at which light travels, and the travel changes when light passes from condensed cold air to expanded hot air, or vice versa. The change in speed also causes the light to change direction.
Scroll further to learn about the physics behind heat distortion. If you find that interesting, read on to try some fun experiments that illustrate this article’s principles. 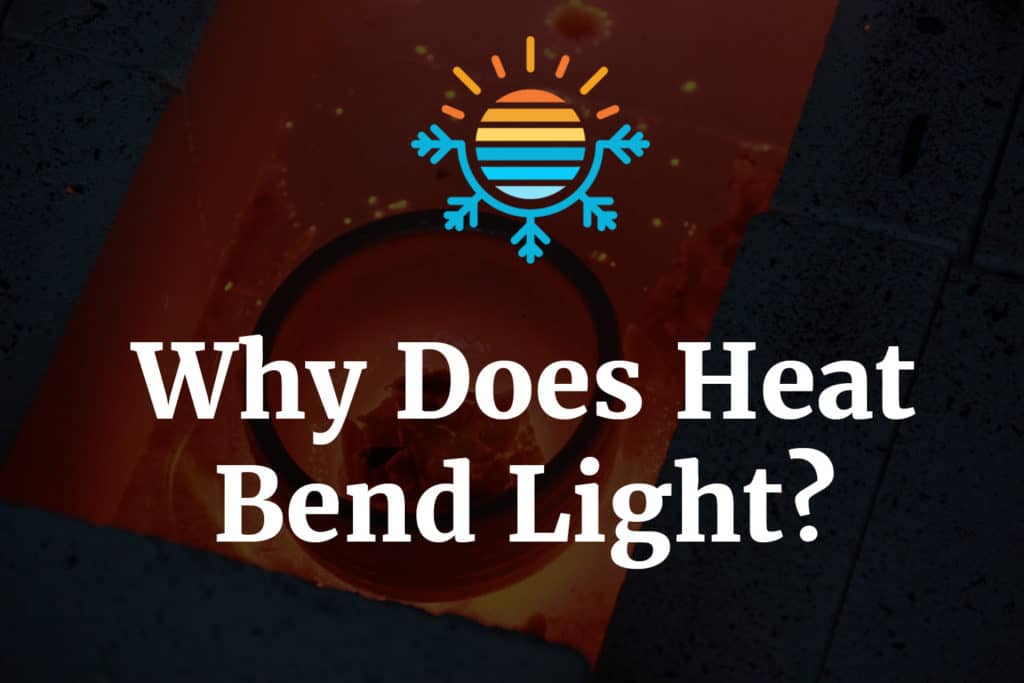 If you want to understand heat distortion, it is important to learn these two concepts: refraction and the kinetic theory of matter.

Refraction occurs when a wave passes from one medium through another. When a wave passes through mediums of varying densities, its travel speed changes and causes it to change directions.
The Encyclopedia Britannica makes a great analogy for this phenomenon. Have you ever noticed how waves move when visiting the beach? Waves in deep water move slower than those in shallow water. Therefore, as the waves approach the shoreline, they move faster and more perpendicular to the shore. Waves of sound and light work the same way.
Light refracts when it travels through different translucent mediums of varying density. Glass prisms demonstrate this very well. When a white light beam travels through a prism, the change in density of the glass bends the white light into multiple directions. This separates the light into its component colors, red, orange, yellow, green, blue, indigo, and violet. 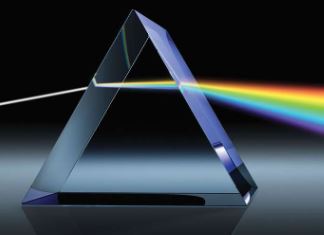 The kinetic theory of matter states that all matter is made up of atoms and molecules constantly in motion. When heat is added to matter, its atoms and molecules vibrate and move faster. On the other hand, when heat is taken away, the opposite occurs, and the atoms and molecules slow down.
The speed of molecular movement affects the density of matter. Faster moving molecules spread out and expand matter. Slower moving molecules come closer together and condense.
However, while the density of the matter changes, its mass remains the same. The kinetic theory of matter explains how matter changes phases. When a solid matter is heated, it expands and becomes liquid. Furthermore, as heat is added to liquid, the matter expands even more and becomes gas. Conversely, as matter becomes cooler, it changes from gas to liquid to solid.
Here is a sample of molecular movement in solids:

Here is a sample of molecular movement in liquids:

Upon reviewing the kinetic theory of matter and the principle of refraction, heat distortion becomes much easier to digest. Heat distortion is when light is refracted by changes in air density caused by heat.
Let’s revisit the blurry grill I mentioned earlier. Imagine you are cooking at a temperature of 450℉ or 232.2℃. If the temperature outside is 85℉ or 29.4℃, the air around the grill will be less dense. Once light passes through the grill’s immediate surroundings, its speed and direction of travel will change, causing the blur that we see.
This video is a great example. This recording shows a Boeing jet landing in Split Airport in Croatia. The temperature outside is 37℃ or 98.6℉. However, the average commercial jet engine burns fuel at 2,000℃ or 3,632℉. That’s a huge difference in air density. One can infer that the light waves surrounding the engines are moving significantly faster. Once the plane starts to land, the engines and the ground below start to blur.

The relationship becomes clear: when light waves pass from hot air to cold air, or the other way around, they’re going to change speed. That change in speed is why the light bends.

Experiments You Can Try at Home

If you want to examine the principles I just discussed on your own, why not try these simple experiments? They both utilize typical household objects and are great for kids.

I added Amazon’s recommendations below.

This propellor is powered by a stream of hot air that will rise from your warm water jar. Since the air flowing from the jar is hotter than the air around the cylinder, its molecules will expand and move faster. The airstream activated by the difference in air density will move the propellor.

Bend Light in the Dark

This refraction experiment from Love My Science is simple and highly effective. On top of that, it was also made with kids in mind. 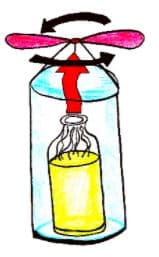 Heat bends light due to a scientific occurrence known as heat distortion. When light passes through two translucent mediums of different densities, it bends or refracts. Since the molecules in hot air move faster than the molecules in cold air, their densities are vastly different.
When light passes between hot and cold air, the difference in air density will cause refraction. This refraction is the definition of heat distortion.