Candles can be soothing, comforting, romantic, and beautiful. They provide light and are handy during a power failure. They can also fill a room with enticing aromas. Who doesn’t enjoy a candlelit dinner with that special someone? All very pleasant, until it happens. Why do they turn black?

Candles turn black because they undergo the chemical reaction of oxidation. In a clean-burning candle, the byproducts are invisible. But some candles produce unburned carbon in the form of black soot. This residue collects on the candle or the inside of the jar, changing the color to black.

You do not have to live with this, however. The problem of smoking, soot-producing candles can be effectively managed. For more on what causes this issue and how you can prevent it, read on. 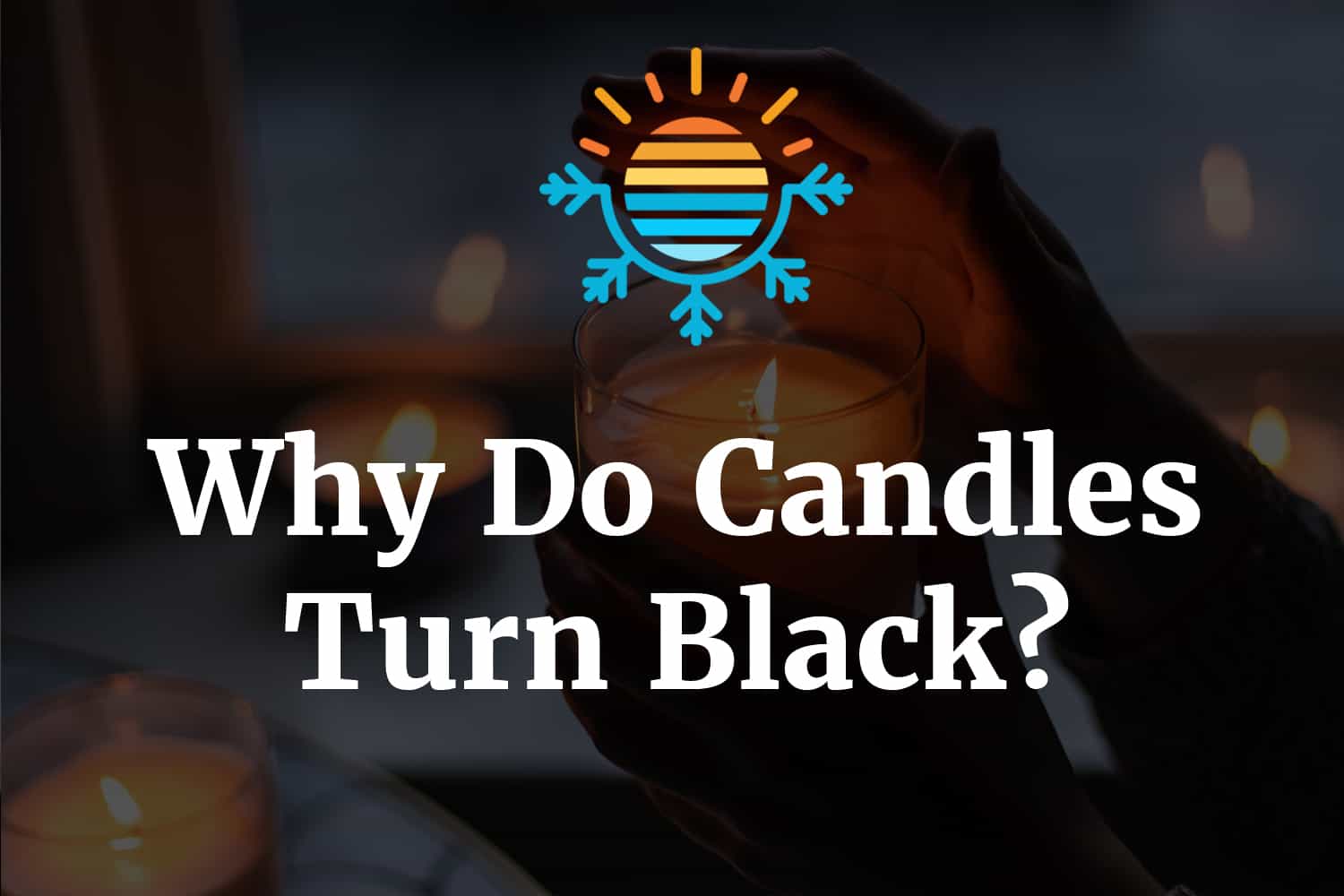 Oxidation is a chemical reaction with oxygen. It can take many forms. Some, such as rust, are very slow. Others, like fire, are a form of rapid oxidation. Your burning candle is an example of the rapid type of reaction.

For something to oxidize, it needs two things: fuel, such as the wood in a campfire and oxygen, which is in the air. A spark or flame sets the fire in motion, just as you light your candle with a match. The reaction begins, consuming the fuel and oxygen and creating waste products.

The wick draws wax up into it. The wax is the fuel, and it reacts with the oxygen in the air, producing light and heat in the form of the flame. As the fuel and oxygen are consumed in the chemical reaction, it forms waste products, which are new compounds.

The candle flame mainly puts water vapor and carbon dioxide into the air. These are gases that pass unnoticed. But some candles can produce another byproduct: unburned carbon atoms. These atoms are what make the smoke black. It rises up from the flame and then settles and deposits soot on your candle.

The soot that comes from burning a candle is a result of an imperfect chemical reaction. Not all of the carbon reacts with the oxygen to form the carbon dioxide. Some of it remains as the pure element, carbon. Think of the smoke that comes off logs burning in your fireplace or a pile of burning leaves. They also deposit soot.

Charcoal is a form of carbon which leaves soot on your fingers when you handle it. Candle soot is exactly the same. The residue collects, forming a black coating, and this is known as black soot deposits or BSD.

Black soot deposits occur because of incomplete burning. This is what blackens your pretty colored candles. You can minimize this by eliminating the causes. Several things contribute to the production of soot. Long wicks, drafts, low-quality candles, and lack of airflow are the main culprits.

This is the most common cause of black smoke and thus soot. The flame of a candle is fed by the wax being drawn into the wick. The candle burns the cleanest when the fuel supply of wax is close to the reaction or flame.

If the wick is too long, the flame sits too far above the wax. This will cause an imbalance in the heat that negatively affects the chemical reaction. Unburned carbon atoms result in black smoke and soot. Your candle or its jar turns black. Keeping the wick trimmed between ⅛ inch (0.32 cm) and ¼ inch (0.64 cm) will help prevent this from happening. 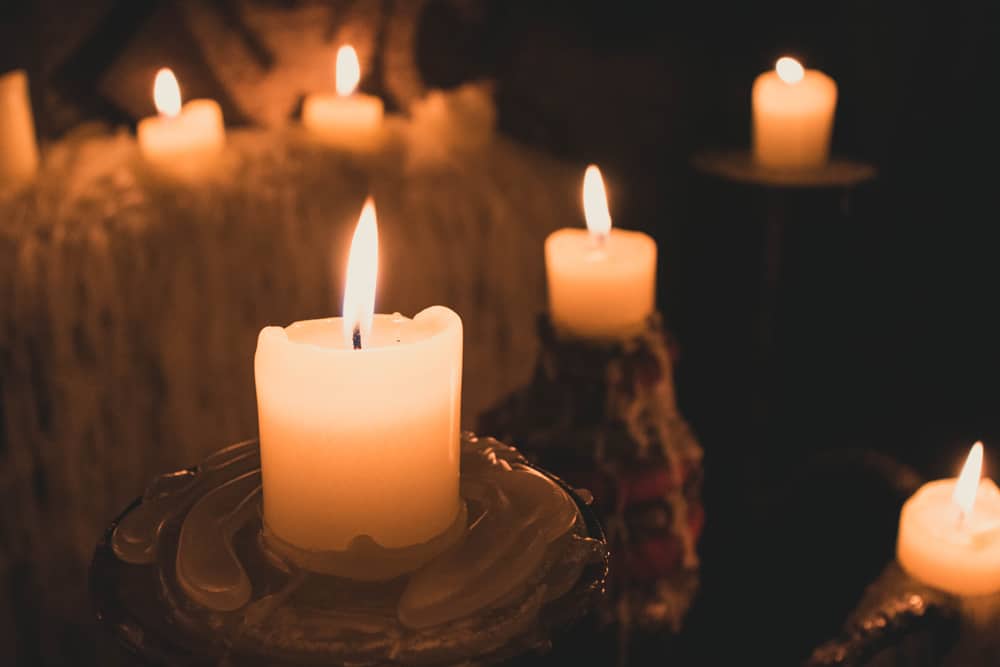 The flickering of a candle flame is caused by moving air. This effect is one of the reasons we love candles. The atmosphere created by the dancing flame is very appealing. However, excessive drafts cause too much movement of the flame and contribute significantly to soot production. Again, using our campfire example, fanning the flames causes excess smoke and soot.

When a candle flickers, it burns more wax. As the amount of wax being burned increases, so too does the amount of unburned carbon atoms: more carbon, more smoke, more soot. Your candle turns black.

Candles are often scented, which is a big part of their appeal. However, the additives used to create the fragrances can negatively affect how well the candle burns. This is yet another way that soot forms. Too many additives can also cause soot. Buying well-made candles from a manufacturer with a good reputation will go a long way toward preventing this.

The additives that give candles their colors can also reduce the efficiency of burning. Some of these dyes can clog the wick, causing incomplete oxidation by slowing fuel delivery.

Here is a helpful FAQ from the National Candle Association:

A lack of airflow will also throw off the fuel and oxygen balance, causing the soot. Candles in jars are prone to this. As the wax melts and the candle gets shorter, the flame is deeper in the jar. This limits access to airflow. The candle will produce more soot as it gets lower, and your jar will turn more and more black on the inside.

Avoiding jar candles or replacing them before they get too low will help prevent this.

The composition of the wick also can cause sooting. The cleanest wicks have a cotton core. While providing greater stability, zinc core wicks tend to burn less clean than their cotton core counterparts. Cotton is the cleaner choice.

A wick that is too big or too small can also cause inefficient burning. While not common, this can be the source of the problem if you have eliminated the others. The easiest solution would be to replace the candle.

Here is a video that has helpful ways to minimize soot:

A natural question is the impact of inhaling candle soot. After all, you wouldn’t lean into a campfire and breathe deeply. That would certainly be harmful. Not to worry, the amount of soot produced by an inefficiently burning candle is far too small to cause any risk to your health.

The National Candle Association assures us that the amount of soot produced by a candle is the same as that of the smoke produced by cooking oils or your kitchen toaster. The soot may be unpleasant, but it won’t hurt you.

Another concern you may have is lead wicks. You can rest easy here, as well. Lead wicks were banned in the US in 2003. Members of the National Candle Association have not used them since the 1970s.

The soot problem is primarily one of appearance. The NCA has debunked some common candle myths here.

Candles are useful items that can help in emergencies, set a mood, and bring us joy. They can also produce soot, turning themselves and their containers black. This soot is in no way harmful to our health and can be minimized by:

By following these simple tips, you can enjoy clean-burning, atmosphere enhancing candles however you like. Their beautiful color will stay intact, and their jars will remain clear. Plus, you’ll never have to ask, “Why is my candle wax turning black?”.