The rest of this article answers other important questions regarding fluorescent lights like how much heat they generate, how they compare to other lights like LED, and whether they are relatively cost-efficient. 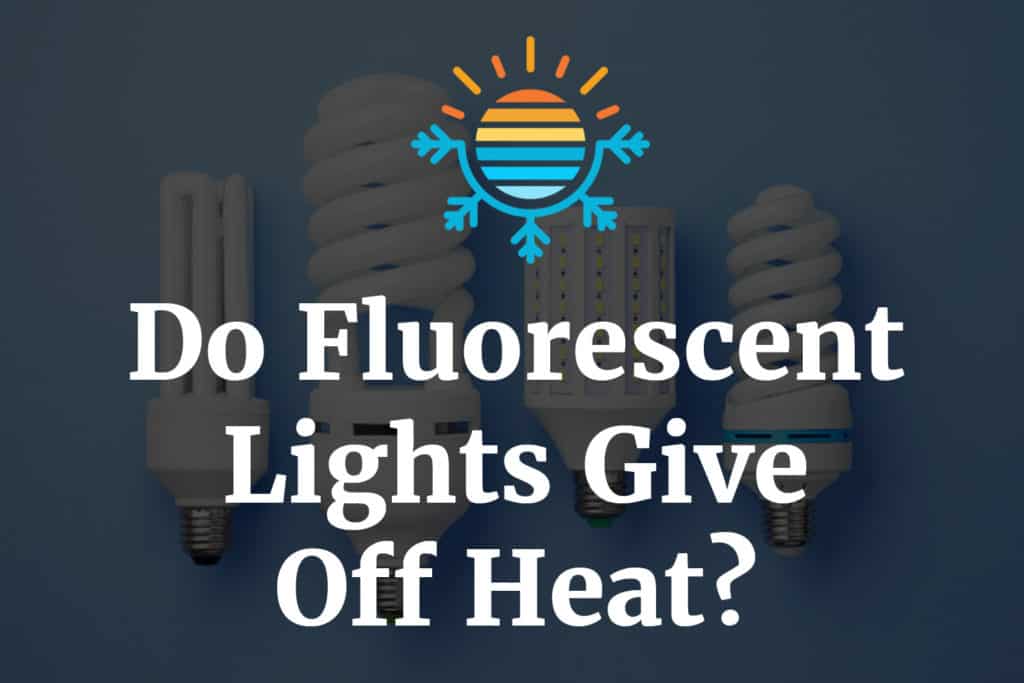 How Hot Does a Fluorescent Light Get?

To give you an idea of how hot that could make a room, I would like to compare it to an average convection heater. These room heaters generally run at around 1500 watts. So a fluorescent light bulb spends 16 times less energy towards heat production compared to a convection heater. In terms of exact temperature, you can expect the surface of a fluorescent light to heat up to 100 °F (37.78 °C).

How Do Fluorescent Lights Work?

Fluorescent lights use two reactions to produce more light than heat. First, the mercury vapor in a fluorescent tube gets ‘excited’ by the electric current. This excitation produces ultraviolet light, which reacts with a phosphor coating to produce visible light. By not relying on the temperature of a material to produce light, fluorescent lights decrease the tube’s overall heat output and use far less electricity. 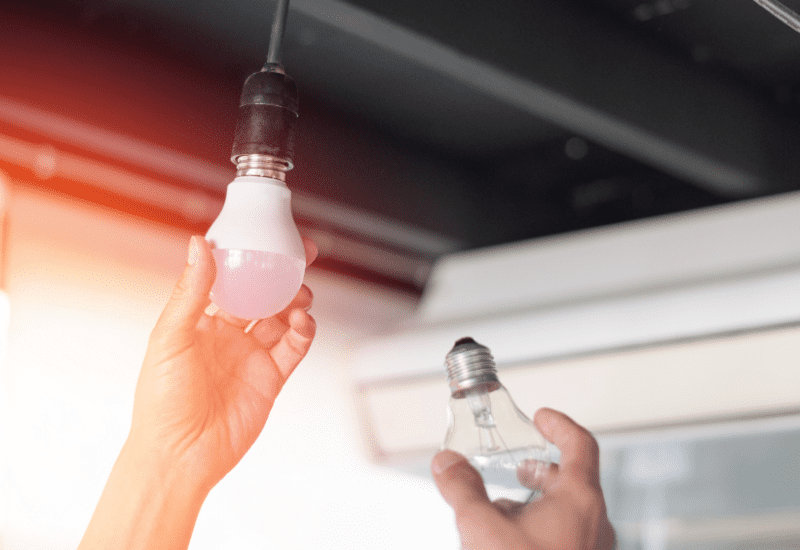 To understand whether you should invest in fluorescent lights or purchase a different kind of lights for your office or home, you have to consider the options available to you. Energy use, the heat generated, and the price of light changes depending on whether the light type is incandescent, fluorescent, or LED. You can see my comparison of fluorescent and other light types below.

How incandescent light works: An incandescent type light works by heating a metal filament with electricity till it starts glowing. As you can glean from the process alone, this is a very temperature-loaded way of generating heat.

Therefore, the temperature output (and electricity required to operate) varies between incandescent bulbs and fluorescent ones, with fluorescent lights being nearly five times more efficient and producing five times less heat for the same amount of electricity used.

However, it is important not to judge the two on an equal electric usage because while an incandescent bulb uses 60 watts of electricity to produce 800 lumens of light, a CFL bulb like Start CFL from GE will use less than 15 watts to produce the same amount of light.

In terms of temperature to lumens ratio, 58.86 Watts of 60 Watts will produce 800 lumens of light (1.9% efficiency for 60 Watts). In contrast, for the same light, 13.5 Watts will be dedicated to generating heat in a fluorescent lighting system (10% efficiency for 15 Watts).

Another factor to consider is the legal status of incandescent lighting. Because of energy inefficiency, incandescent type lighting was set to be banned in 2020. However, the COVID-19 emergency stopped the process. You should keep in mind the possibility that this could be put in motion again in the future.

Finally, because incandescent lights are made with cheaper materials, they command a smaller price. However, this is just a difference of fewer than five dollars. And it is covered by the savings on your electric bill.

With a four times lower heat output and energy requirement, fluorescent lights come out ahead of incandescent type lights. The difference in price per bulb between the two light types is not over five dollars. Therefore, it is not worth investing in incandescent type bulbs for a lower price because you will run up your electric bill every month.

How LED light works: LED stands for “Light Emitting Diode” and it works through the principle of electroluminescence. They use semiconductors, which light up as a reaction when electrons move through it. The relative resistance is much lower than incandescent types. 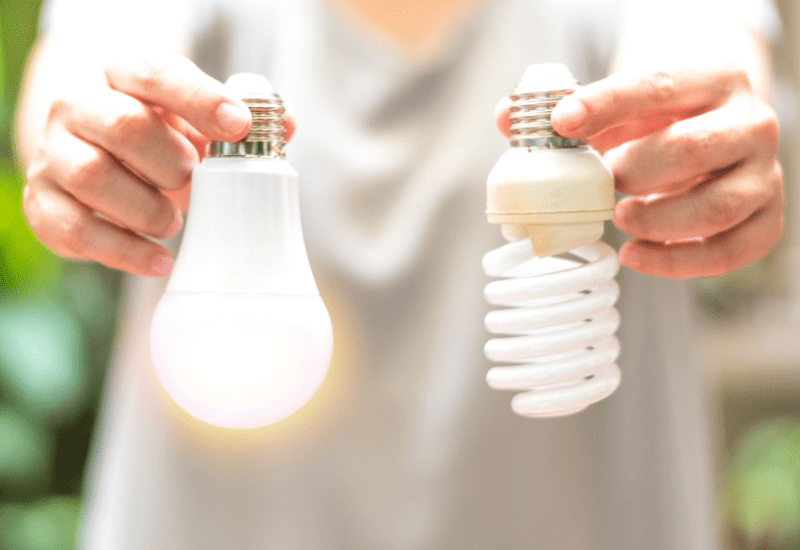 From the 32 Watts used by the fluorescent light, 28.8 Watts would go towards producing heat. On the other hand, the 15 Watt led tube will only spend 7.5 Watts towards producing heat. However, in an air-conditioned room, this temperature difference is not noticeable. The price difference is not a deciding factor either as 100 Watt equivalent of both light types can be purchased for less than 15 dollars, and the price depends more on the brand than the light type.

Before deciding the better light type to invest in, it is crucial to consider that a European Health Authority has warned that LED lights may have toxic effects on eye health and the sleep-cycle.

In terms of pricing, electricity usage, and operating temperature, LED lights come out ahead of fluorescent lights. But as health officials in France have warned of possible health risks of LED lights, it is recommended to invest in dimmer LEDs or ordinary fluorescent lights.

What Is the Difference Between CFL and Fluorescent Lights?

If you look for fluorescent lights online, you will find some of the products labeled and marketed as CFL. These lights are fluorescent and do not use a different working principle. That is why you should not confuse them as a different light type.

CFL stands for Compact Fluorescent Lamp and refers to fluorescent tubes designed to replace incandescent type bulbs. Unlike fluorescent tubes (which are straight and long), CFL tubes are smaller and arranged to be about the same size as an ordinary house bulb.

The excitation of mercury vapor produces shortwave UV rays However, most of the Ultraviolet waves interact with the lining of the tube to produce visible light. Therefore, the UV light from fluorescent light is nominal, and you do not need UV protective shirts under fluorescent lights like you do when exposed to the summer sun for long periods.

Are There Any Other Uses of Fluorescent Lights?

A certain type of fluorescent light product called ‘fluorescent grow lights’ can help grow indoor plants. The difference between grow lights, and ordinary fluorescent tubes is that they let enough UV rays pass through to mimic the right sunlight. This helps the plants grow as if they are receiving the required sunlight. 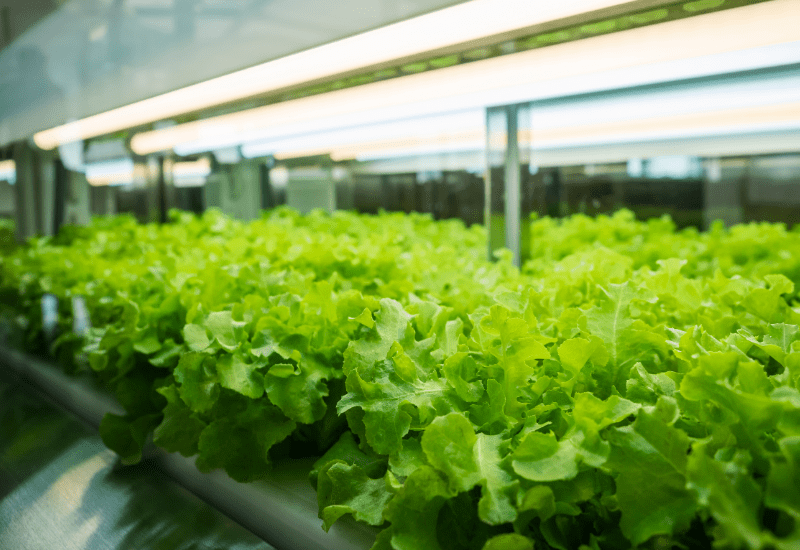 Fluorescent lights do not emit enough heat to make a difference in an airconditioned room’s temperature. With a four to six times smaller heat output than an incandescent bulb, a fluorescent light is its perfect replacement. You will have to invest a few dollars more to buy a fluorescent light instead of a candescent type light, but it will use four times less electricity to produce the same amount of light.

Therefore, fluorescent lights are a good investment over the long run for indoor spaces that need to be brightly lit on a small electricity budget.