Summer is a great time of year for most people, with holidays, vacations, festivals, and events held all around the world. A good summer also means staying cool at home, which is why your air conditioner (AC) needs to run efficiently at all times. And many people wonder if a solar panel system is up to the task.

An air conditioner requires a lot of electricity to run, especially if it’s switched on for the entire day – a common occurrence in summer. A solar power system that is connected to the primary utility grid can cool your whole house, but off-grid systems will require investment and effort to set up and run properly. To learn more about running an AC unit with a solar panel, read on. 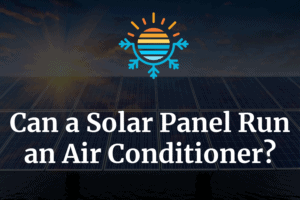 How Do Solar Panels Work?

Solar panels utilize a scientific process known as the Photovoltaic Effect. In simple terms, every solar panel consists of photovoltaic cells and is built to create an electric field. When sunlight hits these cells, which are typically made of silicon layers injected with phosphorus and boron, photons are absorbed.

The above process leads electrons to be drawn into the electric field, thus producing direct current (DC). DC power needs to be converted to alternating current (AC), which is used to run most household appliances – an inverter performs this task.

To sum it up, the panels generate DC power, and inverters convert it to AC power. In an on-grid system, the electricity produced through the solar panels is sent to the main utility grid and then to your home. Users can get paid for excess electricity generated through net-metering programs.

In an off-grid system, the electricity from the solar power system is sent through an inverter, and AC power is then stored in a battery. These batteries then power your home and appliances. For an off-grid system to run air conditioners consistently and efficiently, large batteries are needed.

An on-grid solar system consists of panels, an inverter, a breaker panel, and a smart meter. Multiple high kilowatt solar panels need to be installed along with high kilo-volt-ampere (kVA) inverters to handle the load of running an air conditioner with an on-grid system.

You can get in touch with a solar company in your area, and they will likely let you know all the equipment needed, costs, and installation measures. This is a rather simple method when compared to setting up an off-grid system.

Net metering programs are an excellent benefit once your system is installed. These programs pay users when excess power is generated. One thing to keep in mind is that despite its advantages, most on-grid solar systems cannot function when the electricity is out since it works in tandem with the primary utility grid.

The exact number of panels needed to run an AC through an off-grid solar system depends on numerous factors. You need to understand that an off-grid system needs to generate enough power during the day to run your air conditioner at night. The electricity required rises depending on any other appliances you need to run.

Some steps you must take are:

If your air conditioning unit requires 1.2 kW of electricity and is on for 24 hours, then it needs 28.8 kWh each day. But most AC units switch on and off throughout the day, so assuming it’s running for half the day, that’s 14.4 kWh a day and 432 kWh each month.

Since there’s no utility grid to support your solar power system, your battery bank (a connection of multiple batteries) needs to be large enough to handle such a heavy load. It also needs to hold enough power to run the unit for multiple days.

A multi-day backup is essential to power the system on days when there’s no sun. Keeping this in mind, your batteries need to be high capacity. On average, your battery bank needs to provide around 45 kWh of electricity over three days, ONLY for your air conditioner.

The number of solar panels required changes depending on different air conditioners. It would be best if you had enough panels to produce 14.4 kWh a day, so a single panel won’t do. In generally sunny locations like Arizona, around 12 solar panels would be needed. This could increase to 18 or more in colder areas, where the sun isn’t out every day

You also need to buy batteries of the right size and capacity to complement the electricity produced by the solar panels. A 12-panel installation is small when compared to a full on-grid solar-powered home, but it could still incur a high cost.

An efficient inverter is a critical part of an off-grid solar setup. While there are no inverters that are 100% efficient, you need to pick one that has a good efficiency rating. An inefficient inverter could lead to around 50% or more of the electricity generated to be lost.

An off-grid solar system has the benefit of running without the use of the primary grid. So, as long as your batteries have enough power, you can run your air conditioner. The downside is that there is no backup when your solar panels don’t produce enough power or when any element of your system malfunctions.

If you live in a major city, then an on-grid system is probably the best choice for you. This is because you have a broad array of solar companies to choose from. Equipment and installation charges are also competitive, being reasonable, and affordable in most cases.

After a one-time investment in the beginning, users of on-grid solar systems can save on their electricity bills in the long term. Net metering programs also mean more savings.

Those living in remote areas are better off with an off-grid system. Many city dwellers also make this choice as they can pick and choose every aspect of the solar panel setup. Off-grid systems require a significant investment in the beginning, especially if you want to power more than an AC.

Ultimately, the amount of control you want and the amount of time, effort, and money you can invest in your solar power system decide whether an on-grid or off-grid setup is the best for you.

Solar power systems are becoming more common in most cities today. This boom is largely due to people’s efforts to combat the effects of global warming by using a clean, renewable source of energy – sunlight. The popularity of solar systems has led to a drop in rates, which has further boosted its installation in urban and rural households, offices, and other institutions.

If you do the research and accurately calculate your needs, then a solar power system can work wonders for you. Apart from savings on your electricity bills, some users usually earn back their initial investment in a few years. Moreover, you can reduce your carbon footprint and contribute to a greener future.