Having a generator means your lights, heat, and other creature comforts aren’t interrupted when the power goes out during a rainstorm. But do generators have a darker side that can pose a danger to your health and property?

A generator can explode due to gas spillage, lack of preventive maintenance, or negligent usage. Generators explode when the unit catches on fire, and the fire ignites the fuel tank. However, proper installation, handling, and maintenance can significantly reduce the risk of a generator exploding.

The rest of this article will explain a few topics related to this question in detail, including why generators explode, common causes of explosions, and how to eliminate the risk of explosion. 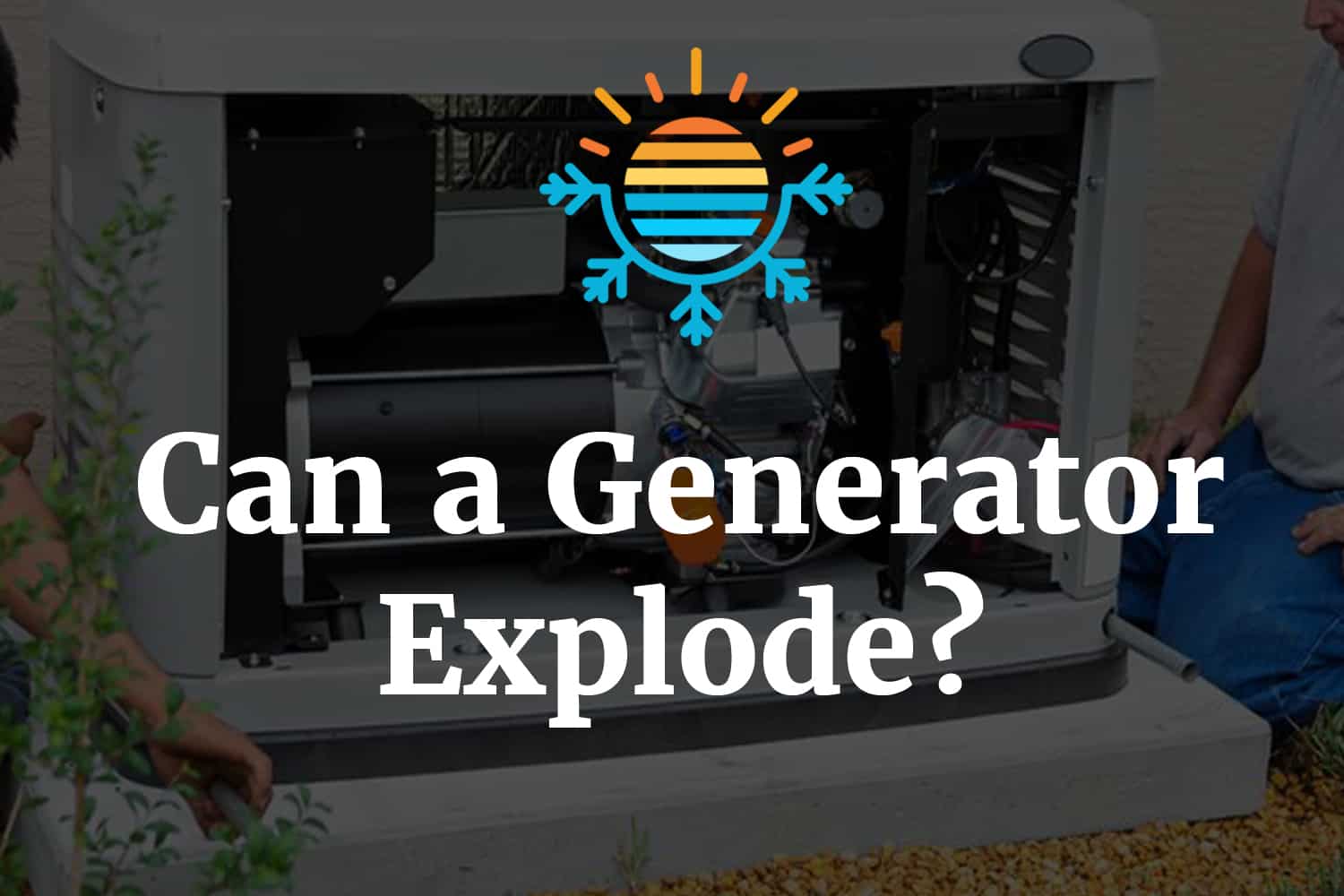 Why Does a Generator Explode?

To understand this risk, we need to dig into how a generator works. Contrary to popular opinion, generators don’t create electricity. Instead, they’re optimized to convert fuel such as gasoline, propane, and diesel into usable electrical energy.

Therefore, a generator is an electrical motor that works in reverse, and its operation generates copious amounts of heat. This heat sets off a series of chain reactions that potentially lead a generator to explode:

Therefore, most generators explode when human errors or negligence compound the effects of the heat generated when it’s running. Let’s examine further how the heat, coupled with human error, poses an explosion threat when running a generator.

Depending on the size, the fuel tank on a portable gasoline generator can hold 1 to 10 gallons of fuel. Most units deliver a run time of between 8 to 13 hours per tank of gas, after which you must refuel. The proper way to refuel a generator entails switching off the unit and cooling it for about ten minutes. Once the engine has cooled down, you can then unscrew the cap and refill the gas.

Failing to follow the recommended procedure increases the risk of explosion. You can accidentally spill gas on the hot part, causing an explosion. Even if you don’t spill any, the gasoline fumes pose an imminent danger.

It’s important to note that gasoline fumes are more flammable than liquid gasoline itself. If your generator is running low on fuel, it’s essentially running on fumes. A single spark is all it takes to ignite the gasoline fumes that escape when you open the gas tank.

Refueling a running unit poses grave personal risk since the fumes are likely to ignite while you’re holding a can full of flammable gasoline.

A generator’s output is measured in watts, which are the unit of measurement of power or electricity. Generators range in size from 500 watts to 40,000 watts.

A generator has two types of watts, namely, starting and running watts. The starting or surge watts are slightly higher because generators use significantly more power to start the engine. Surge watts dissipate after a few seconds to give way to the running watts.

Running watts is the amount of electricity output a generator can sustain when running continuously. For instance, the Westinghouse WGen7500 Generator comes with 750 running watts and 950 starting watts.

A generator can only exceed the running watts briefly, after which it starts to overheat. Generators fitted with a circuit breaker will shut off to avoid overheating. In the absence of a circuit breaker, the generator keeps running until it overheats, resulting in a fire.

Running a Generator Without a Circuit Breaker

As mentioned, circuit breakers protect against power overloads. Each generator runs the risk of overheating. Most generators have a run time of between 8 to 24-hours. Pushing a unit past the recommended run time leads to overheating.

Exposing a running generator to high temperatures also poses the risk of overheating. You should never leave a generator running under the hot sun or run it in an enclosed space. Here’s a handy guide to let you run your generator safely.

An overheating generator that’s not protected by a circuit breaker can catch on fire. If the fire gets to the gas tank through the fuel lines, the generator can explode.

Backfeeding refers to the illegal and dangerous practice of powering your home during a blackout by plugging a generator straight into a wall outlet. The power moves in reverse, from the electrical panel to the rest of the house, hence the name backfeeding. It entails using a cord with a male plug on both ends to connect the generator to the outlet.

Male-to-male extension cables are also known as suicide cords. When one end is plugged into a live outlet, the exposed end poses a fire or electrocution hazard. Backfeeding poses a fatal threat to powerline workers and people neighboring buildings.

Backfeeding a house negates the circuit breaker in your power panel. Since you’re no longer protected from power surges, there’s a risk of your home, appliances, and generator catching fire. In most cases, the fire breaks out when regular electricity supply resumes. When the grid is back online, the power flow reverses. It also subjects your home circuit and generator to two power sources.

The resultant power overload poses a considerable fire risk to both the generator and your circuit panel. If the fire gets to the gas tank, the generator can explode, endangering your life and property. To avoid the risk that comes with backfeeding, you need to install a transfer switch in your circuit box.

A transfer switch allows you to change the power load between the grid and the generator. Instead of plugging the generator into a wall outlet, you get to plug it in the circuit breaker, which allows the normal flow of electricity.

These systems undergo endless heating and cooling cycles, making them susceptible to wear and tear. Without proper maintenance, some parts, such as the brushes, armature, and commutator, start to spark. The sparks can ignite any gasoline fumes and spills, causing the generator to catch on fire and the gas tank to explode.

Poor maintenance can also lead to parts breaking down. Broken pieces can cause the unit to short circuit and catch on fire, leading to an explosion.

Each generator ships with an instruction manual detailing preventive care and maintenance. Following these instructions not only reduces the risk of fire but also increases the lifespan of your portable generator.

Overfilling a generator with fuel increases the risk of fire or explosion. The flammable gasoline can overflow into the hot motor and cause it to ignite. As with other flammable liquids, gasoline expands when heated.

Therefore, you should never fill the gas tank to its full capacity. Make sure to leave a little room for fuel expansion as the temperature rises. Again, overfilling a generator with gas prevents toxic vapors from escaping leading to a pressure build-up, leading to an explosion.

Inferior cords can’t handle the total electrical load from a generator. When overloaded, the wiring becomes hot, increasing the risk of fire. The heat melts the plastic and can set anything connected to it ablaze, including the generator, which explodes if the fuel tank ignites.

This video explains how faulty wiring triggers an electrical fire:

When using a generator outdoors, you need to pair it with heavy-duty generator cables that match or exceed the generator’s circuit breaker. Use portable generator cords that connect to a 50-amp or 30-amp outlet on the generator to supply 120/240 volts to your home’s transfer switch. The cables should be at least 15 feet long to keep the generator away from your windows, doors, and vents.

Technically, generators exploding is an exception rather than the norm. A generator will explode if it catches on fire, and the fire gets to the fuel tank. From a practical standpoint, generators are safe if you operate them correctly.

Espousing proper preventive care, following manufacturer’s directions, using a switch transfer to eliminate backfeed, and buying superior cabling can help avoid fires and explosions. With proper usage and maintenance, you can extend your generator’s lifespan and ensure that it never catches on fire, which would cause the fuel tank to explode.