A fridge is one of the most common and crucial household appliances. Utilized for household purposes, a fridge is considered by many as the first domestic purchase to make. In the same frame as microwaves and cookers, a fridge is typically run continuously, which increases the risk of hazard.

A fridge can catch fire in multiple ways and due to different factors. The most distinct triggers are faulty electronic components, relay switch short-circuiting, a lightbulb remaining on while the fridge door is closed, and plastic components that could provide a fuel source.

Generally, these factors, in combination with different unfortunate occurrences, can cause a fridge fire to develop rapidly, leading to an explosion or emission of toxic gases. To prevent a fridge fire, it is important to understand underlying ignition triggers and fire spread mechanisms that can lead a fridge to catch fire and avoid them. For better context, the remainder of this article will explore the causes, characteristics, and consequences of a fridge catching fire. 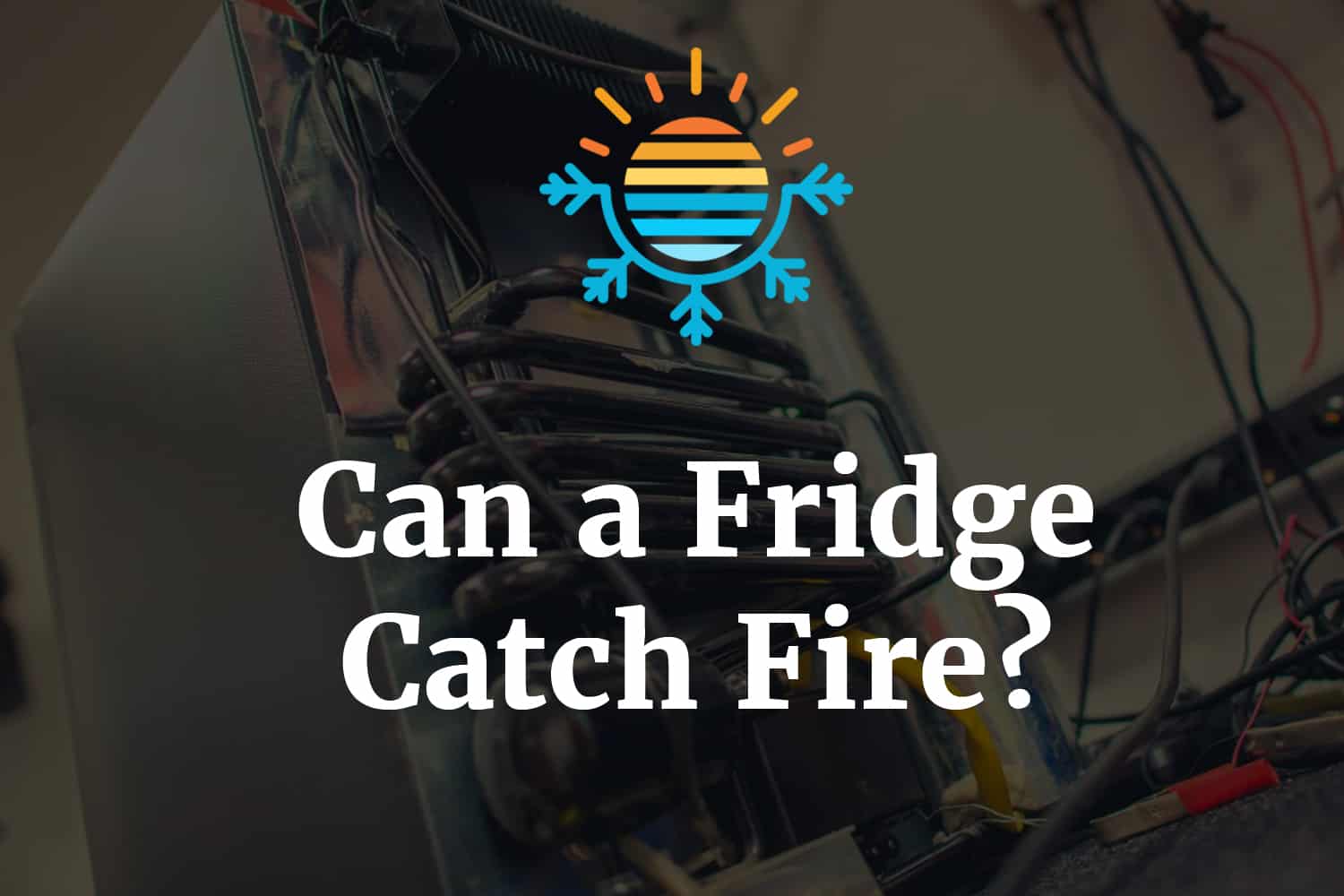 What can cause a fridge to catch fire?

Numerous fires, which unfortunately lead to fatalities and property loss, are typically instigated by damaged wiring/wire insulation, and an electrical component known as a ‘capacitor.’ This technical component stores electrical energy in electrical devices and smooths out electrical supply imbalances to the compressor.

Generally, during its lifetime, a capacitor is subjected to various types of stress. These include over-voltages, over-heating, pollution, humidity, and radiation, which can cause it to age and ultimately fail.

Commonly attributed as both an electrical and mechanical malfunction, a faulty capacitor can trigger a fire due to internal shorting, especially in old refrigerators. And thus, result in a dramatic and violent ignition or pressurized eruption. However, several other mechanical and electrical elements can cause an event where an unfortunate fire occurs. Let’s delve in:

A Refrigerator Light Bulb Left On

A scenario can occur when a light bulb of certain wattage with a reduced wire conductor gauge can overheat and lead to a fire.

The Overload Protector and Relay Overheating

These electrical components can contribute to a fire in a fridge when the water from the water tray drips over the relay or the overload protector. This can lead to a short circuit, and hence, a fire. Furthermore, the breakdown of the start relay coil’s windings can lead to severe heating, resulting in a fire.

Evaporator and condenser fan motors have copper wire windings. These, under some circumstances, can overheat and ultimately become an ignition source.

Incidentally, inadequate ventilation around the compressor could induce overheating, a universal fire trigger in electronics. This is common as in causes where a compressor is not designed with a thermal cutout. In the same breadth, a faulty compressor motor could also produce a short-circuit and catch fire.

A defrost switch timer switches the fridge between cooling and defrost cycles. This enables the evaporator coils to be automatically defrosted. In some occurrences, water can collect inside the appliance housing and penetrate the defrost switch casing, forming a conductive path between the defrost switch contacts and result in heating. This heating can lead to the release of flammable gas vapor, which can accumulate in the case and become a flaming ignition source.

Found in gaseous form in refrigerators, Cyclopentane (chemically identified as C5/C-pentane) is highly flammable and can catch fire, becoming significantly difficult to control.

Frequently, irregular power supply at a domestic residence is one of the most known causes of fire in a refrigerator. Specifically, in cases where the voltage becomes higher than its threshold value, a spark can occur and inevitably build into a fire. 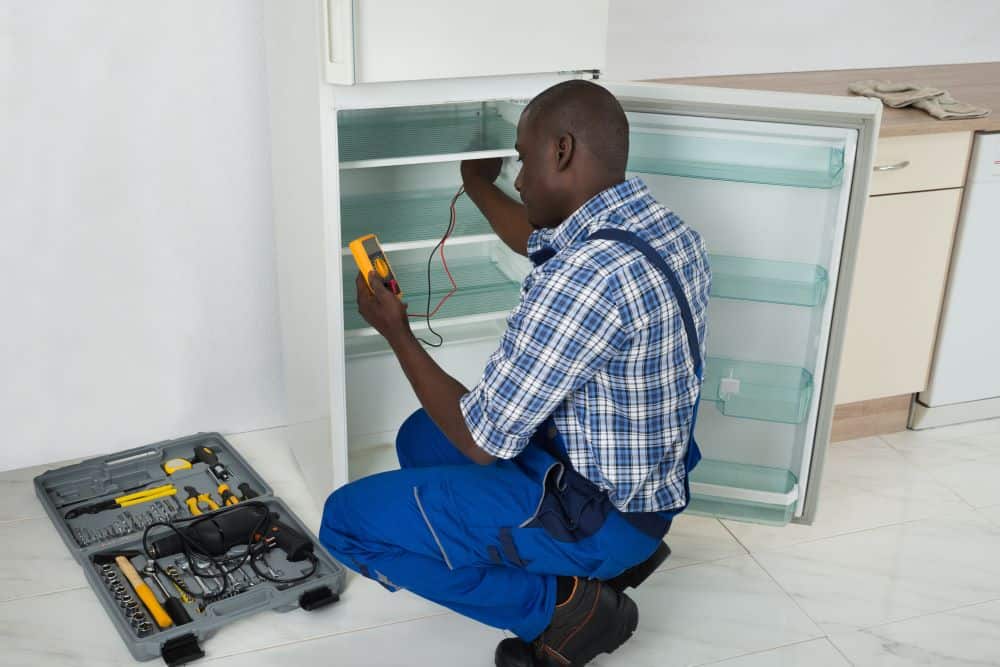 Additionally, other causes mainly revolve around human/consumer error and industrial defects. For example, household members putting burning candles or kerosene lamps over a refrigerator, or an industrial error with a small component. In particular, industrial errors due to component discrepancies are not uncommon and have led to several product recalls.

Plastics: How They Contribute to Fridge Fires

Consequently, the resultant interaction with plastic does not help matters when it comes to electrical fires. Unfortunately, most plastic is highly flammable, and when ignited, can cause a minimal fire to grow tenfold. Although most modern fridges are now covered in metal, older versions, and some newer ones, still employ plastics.

Multiple studies investigations into refrigerator fires in the past have discovered that plastic components such as drip trays and twin-wall backing materials to be significant contributors to fridge fire escalation and spread. Unfortunately, refrigerators contain considerable amounts of highly flammable foam insulation, which is only protected by a thin plastic covering (polypropylene and polystyrene). Consequently, this poses a risk of disaster if an electrical fault occurs or in the event of a fire.

In rare scenarios, if a fridge light bulb stays on, the lamp holder may be mounted in a plastic surface or enclosure. And thus, if the lamp holder melts because of the heat from the lamp, wiring to the lamp may get exposed and incur damage or increase the likelihood of fire. 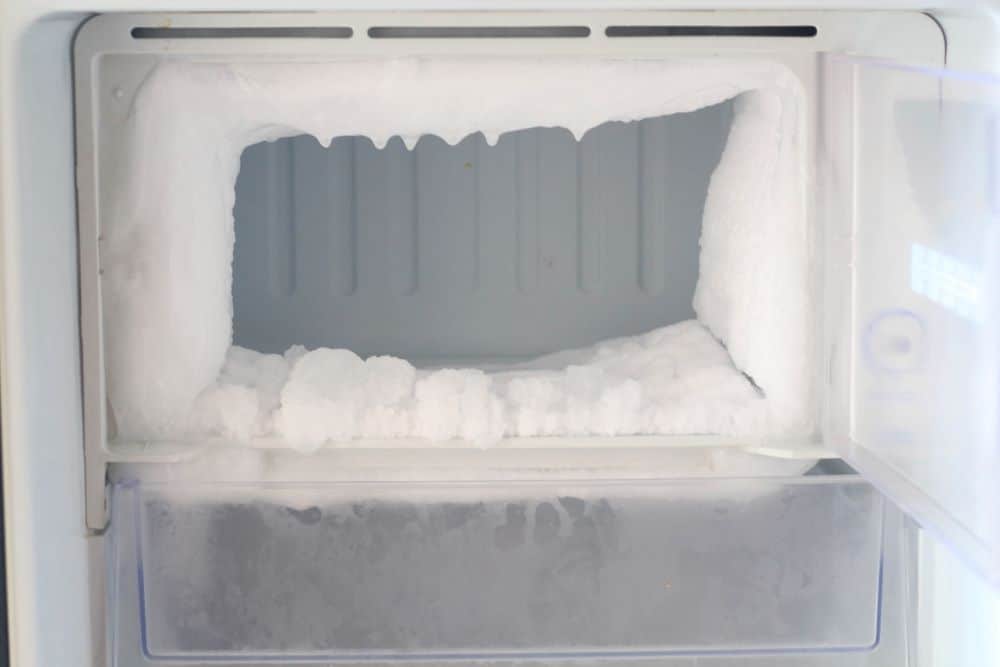 Resultantly, a fridge fire can lead to injury with an individual requiring hospital treatment (eight light and severe), first-aid treatment, or a precautionary check-up. Fatalities are also a probable consequence of such an event, as well as a loss of property. The primary issue is that such fires usually spread beyond the fridge and kitchen, resulting in higher levels of damage and possible casualties.

Ordinarily, to mitigate the possible likelihood of fires due to faults and defects occurring in domestic refrigeration systems, an individual can take certain precautions. The following tips can help you reduce the chances of having to deal with a fire.

In addition to the above precautions, it is important to also prepare for worst-case scenarios. The following tips should help you combat any fire risks.

As has been noted, a fridge can catch fire. However, this is mainly due to poor maintenance and cleaning, compromised wiring, electrical surges, overloading, human error or negligence, and improper use, amongst other factors.

Despite the potential severity of such fires, and the fact that a combination of components (like flammable plastics and insulation material) acting as an ignition source, precaution is the best mitigation. If the tips highlighted above are diligently followed, you should be able to prevent a fridge fire.