Humidity can add to the discomfort felt during warm weather. It can also create situations ripe for mold and mildew to grow in interior spaces. Fans are commonly used as a way to attempt to lower this type of humidity, but how effective are they?
A fan can only help with humidity as much as the air circulation that it generates reacts with the water vapor that is in the air. This means that fans cannot remove humidity directly. However, they can play a role in mitigating it.
If you are interested in learning how a fan can be used to help combat humidity, this article will explain in greater detail how air circulation affects humidity. Additionally, it will outline specific use cases where fans can be used to help lower humidity levels. 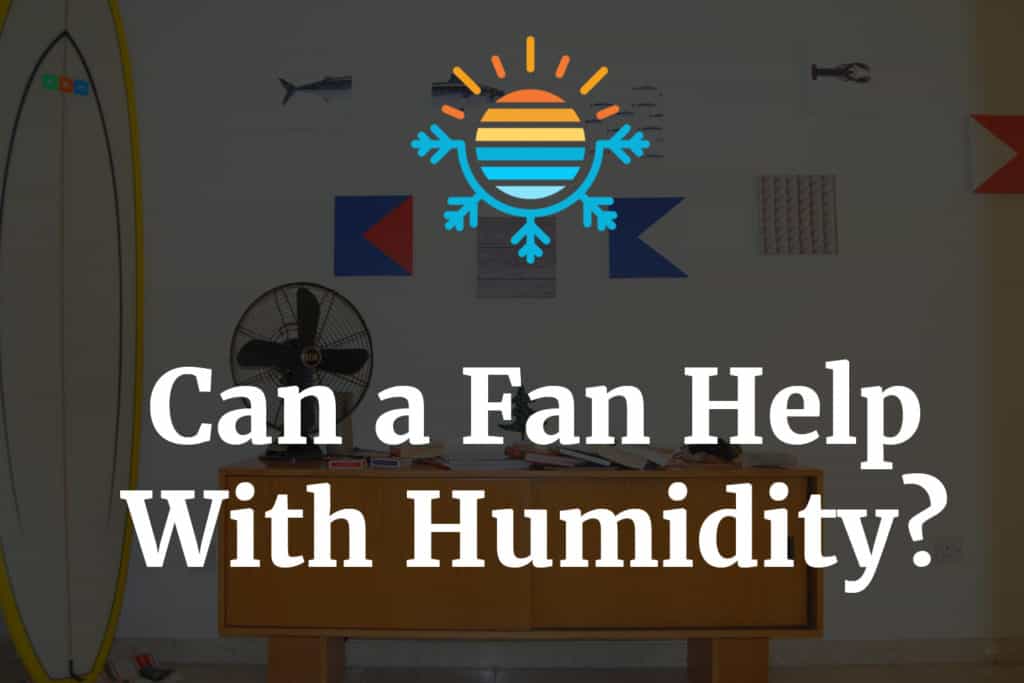 To understand how a fan can contribute to the reduction of humidity, it is first necessary to understand what humidity is.
Humidity consists of the concentration of water vapor that is trapped in the air. The amount of water vapor available to be held in the air depends on your regional climate and the daily dynamics of your local meteorological conditions. The warmer the ambient temperature, the more water vapor that the air can hold.

What Can the Air Current From a Fan Do to Humidity?

A fan performs the function of producing currents of air by rotating blades on a rotor.

This action alone does not have a discernible impact on the humidity level within an enclosed space. Under such conditions, the fan blades would only be circulating the same hot and humid air.
However, when the air current being generated by the fan is combined with other factors, a humidity reducing effect can be achieved. Here are some examples.

A Fan for Ventilation

One of the simplest ways to use a fan to assist in the reduction of humidity is by using it to ventilate a room. Ventilation is the process of introducing exterior air into the interior of a building.
Suppose the external humidity level is lower than what has accumulated indoors. In that case, a fan placed in or near a window can help to reduce internal humidity by drawing in dryer air.
Likewise, if the temperature outside is lower, drawing in cooler air with a window fan can reduce the amount of water vapor in the room by mixing the cooler air with the warmer indoor air resulting in the internal ambient air not being able to retain as much water vapor as it did when it was warmer.
For fans to function more efficiently as ventilators, placement is essential.

A box fan situated on the window sill of an open window would be an example of a good placement location for ventilation. A table or pedestal fan placed in the middle of a room would be an example of the opposite.
To achieve good circulation, the fan must be located as close as possible to the external source of air that it is meant to be pulled in and circulate in the room.

Using a Fan to Exhaust Humidity

Fans can also be used to exhaust humid air from the interior to the exterior. These fans can be specialized, such as a bathroom or kitchen extractor, or as simple as a box fan placed on an open window facing outward.

By directing the air current to the outside, the humid air from the interior is vented to the exterior.
There are window fans on the market that allow you to choose the direction that the blades rotate.

This way, you can use your window fan as either a ventilator or exhaust fan, switching as needed without having to physically turn the fan around.
An example of such a reversible window fan would be the Comfort Zone CZ310R. Designed to accommodate a variety of window sizes with its accordion-style expanders, the Comfort Zone incorporates a remote control and multiple fans speeds in a twin-fan design.

Using a Fan to Cross-Ventilate a Room or Building

Cross-ventilation is an extension of the process of ventilation that was described above. It can be seen as combining the principle of ventilation and exhaust into a single process.
It involves bringing drier or cooler exterior air to the interior with one fan while expelling humid interior air with a second fan. This action creates a cross-current.
The simplest example of this would be to have a box fan facing inward on an open window in the living room.

Concurrently, you would have another box fan facing outward on an open window in the kitchen. This would channel the air being pulled in from the inward-facing fan to be expelled by the outward-facing fan.
A similar effect can be obtained, albeit less efficiently, by placing a high-powered fan on a window and opening an exterior door.

The most efficient use of cross-ventilation for humidity reduction would involve the use of a whole-house fan.

These are powerful fans that exhaust air and humidity out through the attic or existing ductwork of a home or building. These fans use existing windows and doors as the inlets for what is hopefully drier and cooler air.
There are also whole-house fans, such as the Air King 9166F, that can be mounted semi-permanently on a window, similar to a traditional reversible window fan.

While similar in form factor to regular window fans, that’s where the similarities end. In the case of the Air King, the difference can be appreciated in its large 20-inch (50 cm) blades and its 1,600 maximum RPMs in blade rotation speed.

Whole-house fans are powerful enough to generate positive air pressure in the home or building where they are installed.

The positive pressure that is created expels heat and humidity via open windows elsewhere in the building. Whole-house fans can change the air in the house three to six times per hour.

Is Cross-Ventilation Possible With Ceiling Fans?

Even though the majority of ceiling fan models come with rotors and blades that are reversible, ceiling fans are not very effective for cross-ventilation.

Being positioned in the ceiling, they are unable to pull in or expel humidity directly through an opening to the exterior. Their slower blade speeds do not come close to generating positive pressure.
For these reasons, ceiling fans are the least capable of mitigating humidity compared to other types of fans. However, due to their ability to balance the thermal stratification that occurs naturally in a room—warmer air residing closer to the ceiling with cooler air nearer the floor—they are sometimes mistakenly credited with doing so.
The balancing of the thermal stratification can result in a more uniform temperature being felt in a room. This can also result in a more uniform distribution of the humidity levels in the room.

The result is a more comfortable sensation for the occupants compared to what it would have felt like if the temperatures had remained stratified. The overall humidity levels, however, remain the same.

A fan is designed to produce currents of air, not to directly remove humidity from the air. Even so, a fan can be an integral component of a humidity reducing system.
Be it through specialized fans—extractors and whole-house fans—or with modest and ad hoc setups, such as box fans on a window, this is accomplished by directing the air current that fans produce to channel less humid air to displace humid air.

Alanna is an avid traveler who lives in Michigan. In addition to writing for Temperature Master, she also sells crafts on Etsy and takes long walks through the forests near her home.

Comfort, convenience, high performance, and efficiency are all qualities used to describe Hitachi air conditioners. However, even the best air conditioner will give you trouble at some point, and...

Baseboard heaters are an excellent alternative to whole-house heating since they’re cheaper to run, consume less space, and are easier to install. Using an electric baseboard means you don’t have...