Loud noises are the leading cause of hearing loss, and repeated exposure to even moderate noise levels can result in impaired hearing, so when choosing a generator, it is important to consider the noise level produced by its operation, health, and other reasons. How about a solar generator? Are they noisy?

Solar generators are not noisy. Unlike diesel and gas-fueled generators, the solar version uses an inverter. Instead of an engine, the main source of noise is emitted from conventional generators. Since a solar device has no engine, exhaust, or moving parts, the sound created is barely noticeable.

Following is more information about solar and other generators that produce the least noise when operating. Also discussed is why we should make choices that lessen or eliminate excessive noise, whenever possible. 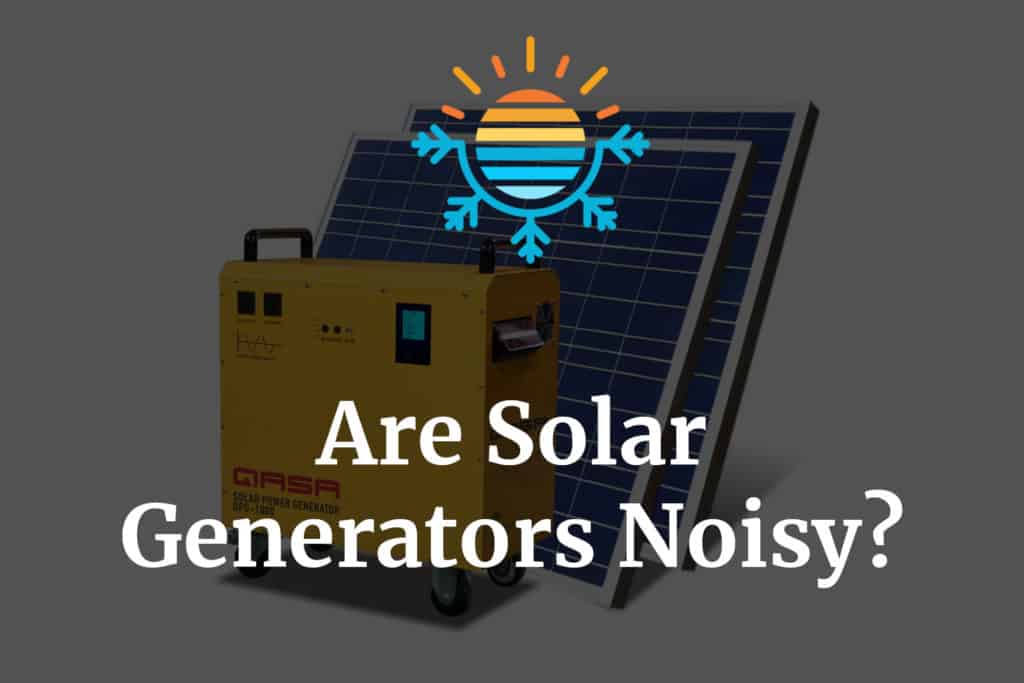 What Are Solar Generators?

Solar generators usually refer to the portable kind. These often don’t have the larger gas-fueled generators’ power capability, but they can be used indoors and are convenient for use during traveling or camping. According to Climate Counts and other sources, solar generators have the following basic components:

The solar panels are sometimes sold separately from the rest of the components, so you need to make sure you have all the parts needed for operation when buying. The only noticeable noise emitted from a solar generator’s portable power station comes from the inverter. However, this buzzing sound is minimal.

Why Do We Need a Quiet Generator?

Many generators are not just noisy. They are very loud. Construction workers, homeowners, and campers are using more and more of these devices. All contribute to a growing concern over noise pollution and its effects.

What Is Noise Pollution?

The EPA offers a traditional definition of noise as unwanted or disturbing sound, the kind that can interfere with or disrupt normal activities or our quality of life. Since it’s not the kind of pollution one can see or smell, it has gotten less attention than water and air contamination.

Nevertheless, because of the importance of regulating excessive noise, acts were passed several decades ago addressing this issue, including The Noise Control Act of 1972 and the Quiet Communities Act of 1978. Because opportunities to experience noise-free intervals are disappearing.

What Are the Adverse Effects of Noise Pollution?

There are four basic reasons to be concerned about excessive noise, similar to the noise that a generator makes.

Noise can be a serious health hazard for humans. According to the EPA, millions of people are harmed by noise pollution. Besides hearing loss, adverse health effects include stress and stress-related illnesses, sleep disruption, speech interference, high blood pressure, and productivity loss. The negative effects of high noise levels can be countless, according to the CDC.

National Geographic refers to studies that found adverse effects of loud noises on insects and animals. For example, noise pollution has caused caterpillars’ hearts to beat faster and bluebirds to have fewer chicks. Noise can also interfere with animals’ natural ability to find food, navigate, attract mates, and avoid predators, which, of course, affects their survival.

Dolphins and whales, which rely on echolocation to communicate and other survival necessities, have been harmed for years by oil drills and ships, and are being hurt more so now, with sonar devices and seismic tests, intruding into their once tranquil environment. The minimal noise that comes from a solar generator makes it a great choice for camping and other outdoor activities.

Peaceful Use of Property

This has to do with the Covenant that promises landowners and tenants “quiet enjoyment” of their property or rental. This is not possible if a neighbor or construction worker is using a noisy generator anywhere near the premises.

With industrial and commercial zones getting closer to residential use, outdoor noise has become a growing concern for communities. Many US cities have enacted noise ordinances to address these concerns. Raleigh and Chapel Hill are among those that have adopted restrictions in North Carolina.

One reason to invest in a quiet generator and cut down on noise pollution is to avoid the fines and penalties associated with city or county noise ordinances. Although a solar generator’s upfront cost is higher than a conventional one, it is well under the cost of recurring fines.

Violations of noise ordinances in Raleigh, North Carolina, can result in a maximum fine of $500 for each violation, and a jail sentence of up to 30 days.

Noise levels are measured in decibels (dBs). The capability of loud noises, usually above 75 dBs, to cause harm depends on:

Not All Conventional Generators Are Noisy

There are newer, quieter generators that use inverters, but still use gas for power. Even though these are not as noisy as many other gas-fueled models, there are still issues with fumes and CO emissions, which you won’t encounter using solar generators. Nevertheless, Consumer Reports (CR) notes that some of the newer portable, gas-fueled generators have been built with engines that emit less CO. Others have begun to include built-in sensors that trigger “an automatic shut-off if CO builds up to dangerous levels in an enclosed space.” CR says it will no longer recommend generators that fail to meet certain safety standards.

Others have begun to include built-in sensors that trigger an automatic shut-off if CO builds up to dangerous levels in an enclosed space. CR says it will no longer recommend portable generators that don’t meet certain safety standards.

BEUP! lists 7 low-noise, fuel-run generators, including decibels and watts for each. If the provided information is correct, these are quiet enough to avoid ordinance violations, although still not as quiet or clean as solar versions.

Veterans and their family members may be able to purchase these or solar generators at reduced prices. Others will find some of these models, listed by BEUP!, available on Amazon like the WEN 56125i. A highly ranked solar generator sold on Amazon is the Jackery Portable Power Station Explorer 1000.

When it comes to concern about pollution of any kind, solar generators appear to be the superior choice over conventional alternatives. According to Acoustiblok, most generators remain noisy and operate above acceptable community noises levels, unless modified with soundproofing.

Even though manufacturers are creating less noisy diesel and gas-fueled devices or finding ways to muffle noise emissions, these still add to the noise and air pollution what solar generators do not. The only drawbacks of using the solar version are that they rely on adequate hours of sun exposure to store enough energy in the batteries for use, and current models are not powerful enough to handle a heavy or normal household load.

However, some come with batteries that can be recharged through a CIG port or wall outlet, and they are perfect for camping and use in enclosed spaces.